Another great week of piratey gaming! With another 115 (ish) entries, campaign participation held steady through the 12th week. We’re up to about 1400 games logged in the campaign. Lots of games with fortifications this week.

Spain and England traded spots several times again this week, but somehow Spain expanded its lead by the end of the week.

The Dutch gained a little more on the front runners, shrinking their deficit by a few points. Pirates seem to have lost motivation and are slowly joining the Natives in the backwaters. The Boyar better watch out. I hear Pirates like to munity when they don’t get results….

Jason Klotz has kept the top spot again! It looks like he was busy demoing at Nashcon over the weekend.

English champion Terry Abbott has pulled into 2nd place and David Nye is in a close 3rd. The curve has smoothed considerably since the first weeks of the campaign. You now need 30+ points to be in the top 30.

Again, we had very high participation in the weekly objective. It was awesome to see people trying out fortifications.

Breastworks were one of the most commonly used fortifications, followed by the Stone Tower Fort. There was a lot of variety in the models used for various fortifications in the photos that were submitted. I hope everyone had a good time!

I think every fortification in the game was represented in entries this week.

Several players accomplished the impressive Oak & Iron objective of playing a 200+ point game as well. Pictures of these games were impressive! Look at all those big ships!

I promised a prize of 10 gold Fortune Coins to the player who accomplished the weekly objective the most times last week and that prize goes out to Matthew Doerr this week! Congrats and may this gold bring you good fortune!

This next week’s objective is kind of weird, but I hope it will foster a very aggressive style of play and some epic stories. This week you score a bonus point if your commander “Cheats Death” by spending a Fortune Point to jump from a destroyed unit to another friendly unit within 8”.

This is not typically something you want to do in a game, but I get the feeling it’s something that people forget about doing sometimes so I wanted to feature it in the campaign.

So, go get your commander killed. But only Disney style. I want to point out some weird things you can do when you resurrect your commander with the Cheat Death ability. First, you can be really aggressive and charge in with a heavy commander and try to make a mess of your enemy’s formation and plans. Playing carefully with your commander is usually prudent, but if you keep the Fortune Point to Cheat Death and keep a unit close enough, it could throw your opponent off balance.

The other delightfully wicked thing you can do with the Cheat Death ability is activate your Commander twice. “Wut,” you say? As far as I can tell, if the unit you jump that “dead” Commander to has not activated yet, nothing stops you from using those Commander Points again! Cheaty McCheaterton! It doesn’t always work as sometimes that unit has already activated or all your units have already received Commander Points. But it can be a nasty surprise to do a big turn with your Commander, the Commander’s unit gets wiped out, the Commander jumps, then responds with another big turn of Command Actions! Diabolical! Might be maybe that should be illegal, but I can’t find anything that stops it right now.

The objective for Oak & Iron players is a little easier: you must have at least one ship take both a Rally and a Repair action over the course of a game. Stay in the game!

This week’s photo prize goes out to Gregory Padilla for this awesome shot of a fort battery firing on approaching pirate boats. He has set up some incredible tables over the course of this campaign! You can see some of his full spreads in some of his posts on the big Blood & Plunder: Buccaneering Across the Spanish Main Facebook group.

The weekly photo prize is a set of the 3 Organized Play exclusive minis and a set of the 6 commander cards for the Pacific Adventure. No one can win this prize more than once during the campaign.

The campaign is almost over, so check out all those end of campaign goals. The Grand Prize of a Galleon or 6th Rate Frigate with a set of Seamon’s Quality Sails will go out to a random player from the winning nation. Right now it looks like a Spanish or English player will be getting that prize, so you should play at least one game for both of those nations to give yourself a shot at that big prize. That’s a good $400-$600 value!

On the other end of the spectrum, a player from the losing nation will get a fully painted Stone Tower Fort. This is a trick to get everyone to play for the Natives this week! They are solidly in the last place, but I suppose if everyone played a few games for them this week, the Natives could rise again!

Now, here are a few important messages from your commanders.

With the end of the campaign fastly approaching, I want to salute the brave soldiers of New Spain that have pushed us this far. I am not surprised that we have come this far, for I never doubted the Spanish resolve.

As time wears on, I am looking for more Spanish commanders to join our fight. Encourage your friends, enemies, and family to fight for Spain, and beat the English. With a fight this close, every game you play counts.

To help this cause I am now going to give to different players a prize for playing a game during the Sunrise or Sunset, and photographing something to represent the scenario. I hope to see all your photographs.

English commanders! Keep Pouring it on! We only have two more weeks two go! The finish line is in sight and glory awaits us on the other side! The enemies are all around and they will not stop their quest, to do whatever they can to ensure England doesn’t achieve its goal! of total domination of the New World! We must make sure they never achieve what they Seek! Let’s give them nothing! And take everything from them!

Reminder for this week’s challenge you need to have your Commander cheat death to achieve extra points! As well I will be awarding the 4ground Ports of plunder medium dock bundle for the player that achieves the most English spirit!!

For England, For Home and for the Prize! We got this!!

Look for an update from the French Commander next week.

Look for an update from the Dutch Commander next week.

Look for an update from the Native Commander next week.

The gap widens between us and the major powers! While I’d normally never suggest placing your commanders in harm’s way, this week is about guts! We NEED to at least beat out the snarky French, lest we become nothing but a footnote in history! I am currently on the run, being pursued by Governor Tipo’s flotilla with stores running low! If we can pass the French I have a chance at getting out of this alive!

The Boyar of the Brethren

We have slowed down too much! Only one game was played this week and one last week. This week’s game, seen below, was by Jayden King. We aren’t too far behind the natives! If the Scottish were a separate faction (i.e., no points given to other factions), we’d be in dead last (adjusted scores can be seen below), but we can still come in second to last if we try! Remember, everyone who plays as Scottish will get a promo card, so get to it! As an added bonus, if we end up beating the Natives, the player who played the most Scottish will get a blister of his/her choice or a longboat, so if there’s a unit you’ve been eyeing to get, you can earn it by playing a lot of Scottish! Good luck! Currently, nobody has a large lead on most Scottish games played, so anyone can earn this prize if they play enough. 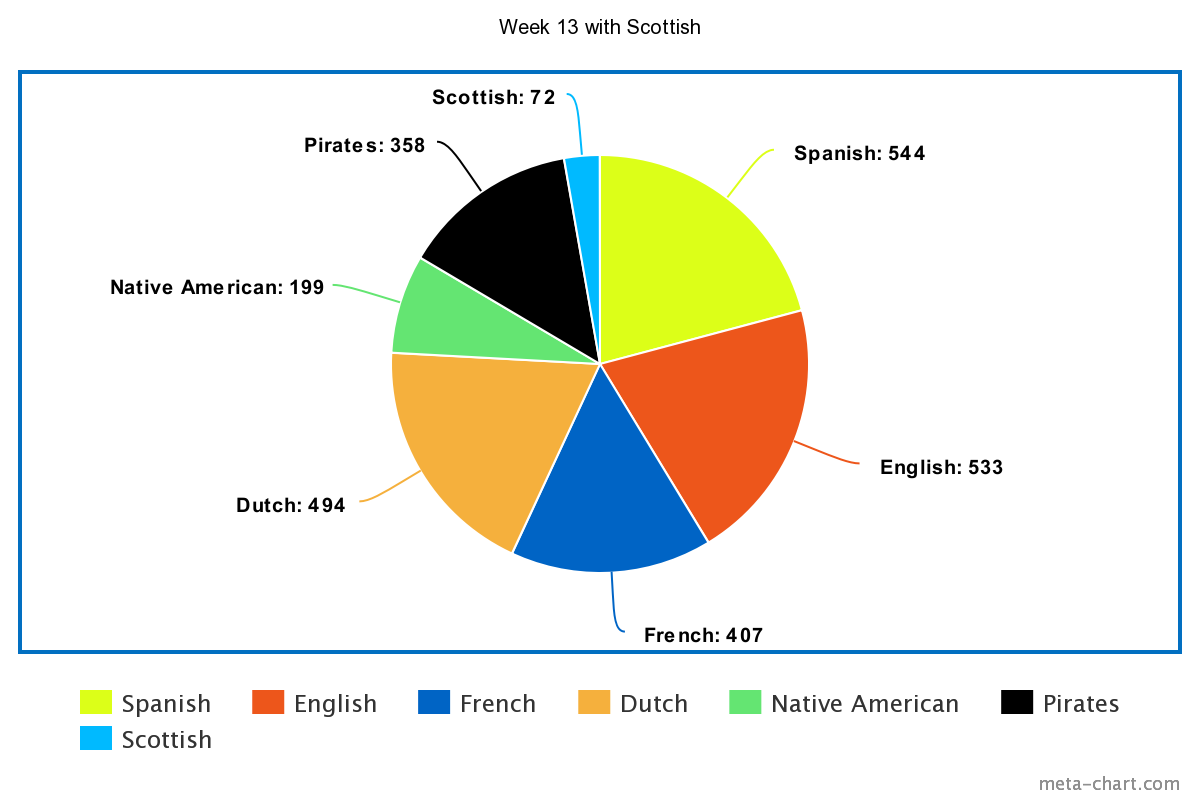 Nobody allied with natives this week, so there is no prize to be given for that objective. Last week the prize was claimed by David Dzwonek, so he will be getting a native blister prize.

Have a good week! There’s this week and next left in the campaign, so stack up those points! I expect to see lots of Commanders dying this week. Don’t forget, This is a good chance to get some good shots of your Commander models as well for the “Best Painted Commander” objective.

At the end of the campaign (and maybe some throughout the summer), more than $1000 in prizes will be awarded! Prizes will include:

You can unsubscribe at any time.