The Corvette is one of the most unique ships Firelock Games offers. It is a laser-cut wooden model rather than a resin kit. Firelock Games’ description hints at some of this ship’s peculiarities.

Corvettes, also known as a barque longues, were often the smallest warships found in European Navies of the day. Built light for maximum speed, they were used for coastal patrols and reconnaissance as well as anti-piracy operations. Their swiftness and shallow draft also made them popular pirate and privateer vessels.
Please note that this ship’s price cannot be reduced with any coupon, discount, or offer.

I think this ship is a glimpse into an alternate world where all ships were going to be laser-cut models. This is the only ship in the range not produced by Firelock Games, that I know of. It’s deck shape is longer and has straight sides compared to all other models. It’s lacking some details that come out great on the resin kits, such as nail holes or a detailed rudder, while having other details that the resin kits can’t have, like railing and catheads. 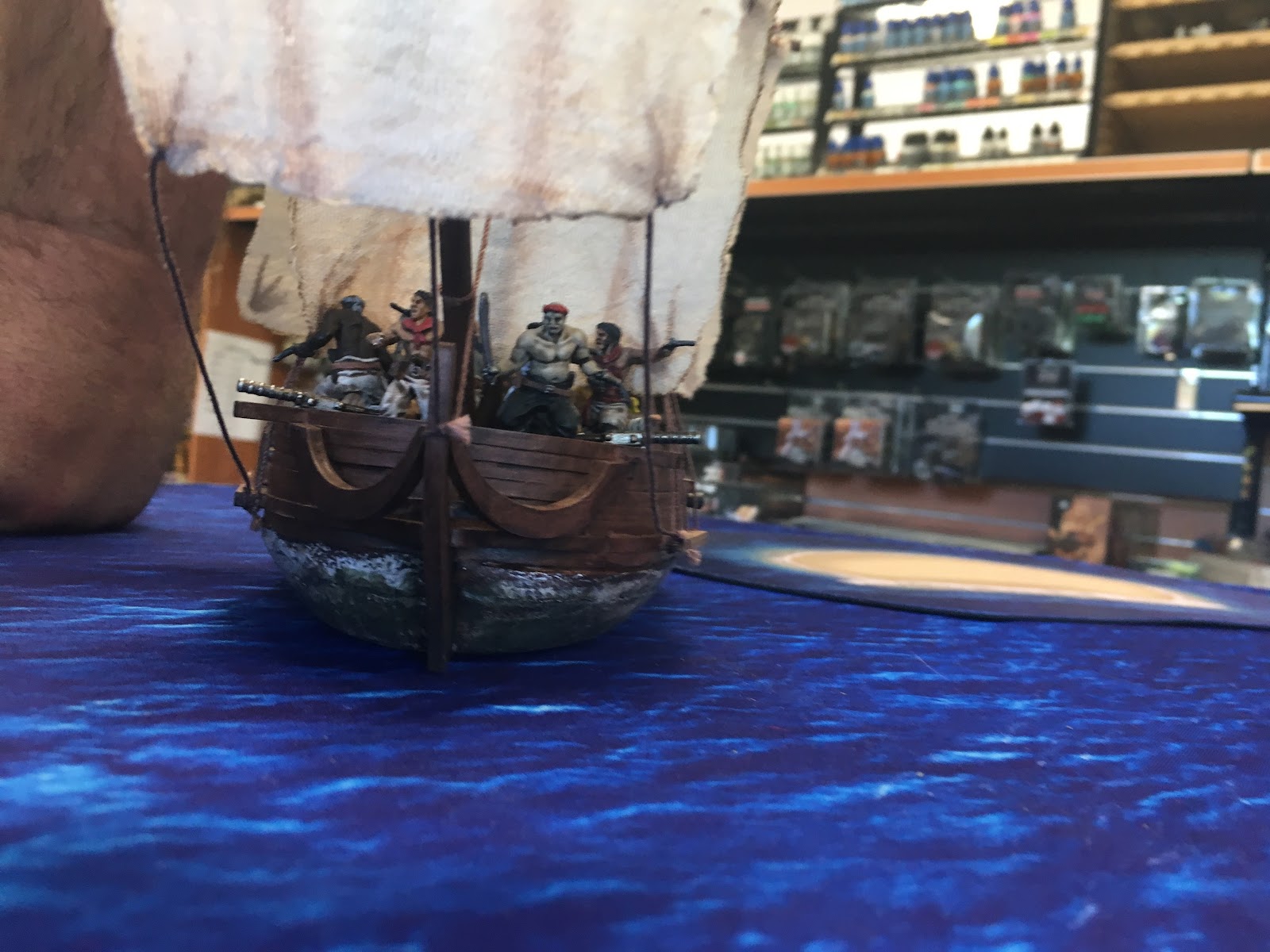 Let’s look at the Corvette’s stats. 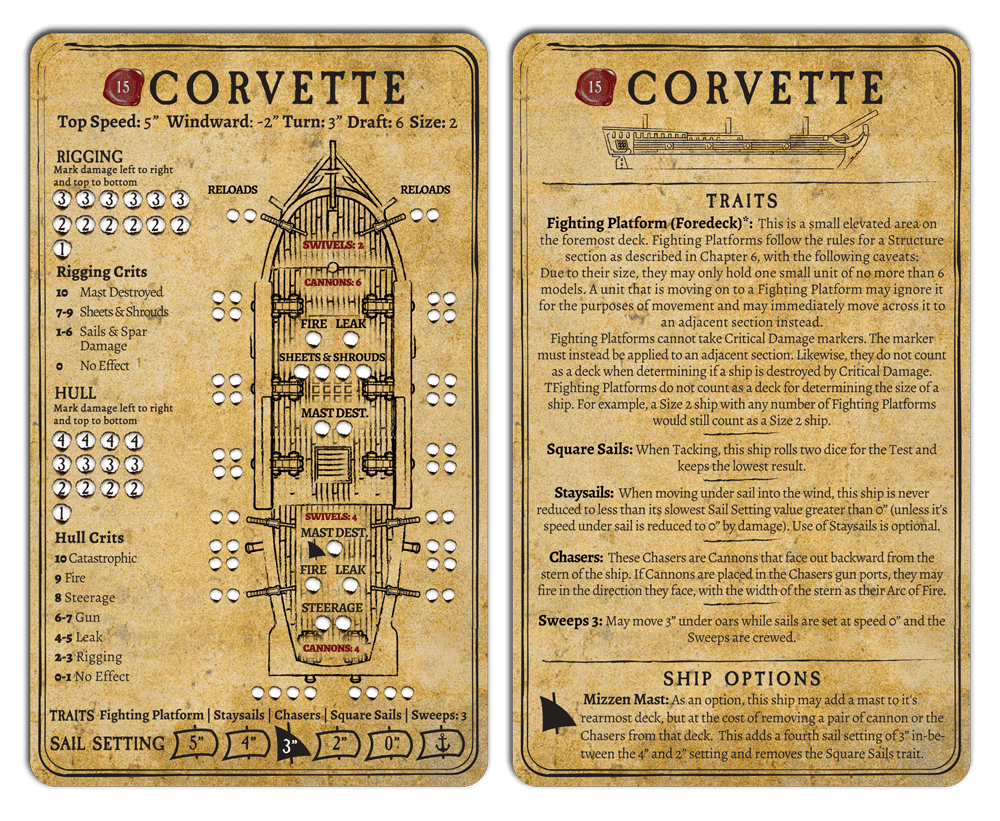 The Corvette is among the fastest ships in the game with speed of 5”. It also has two sail settings, 4” and 2”, before 0”. Being a square rigged vessel, it takes a dedicated action to change the sail settings, and has a windward value of -2. When you try the advanced maneuver tacking you also roll two dice and keep the lowest result, an ability most read as “don’t tack”. You also get staysails, an ability I once thought of as mostly useless, but has been very useful to counter multiple wind lulls or other effects. 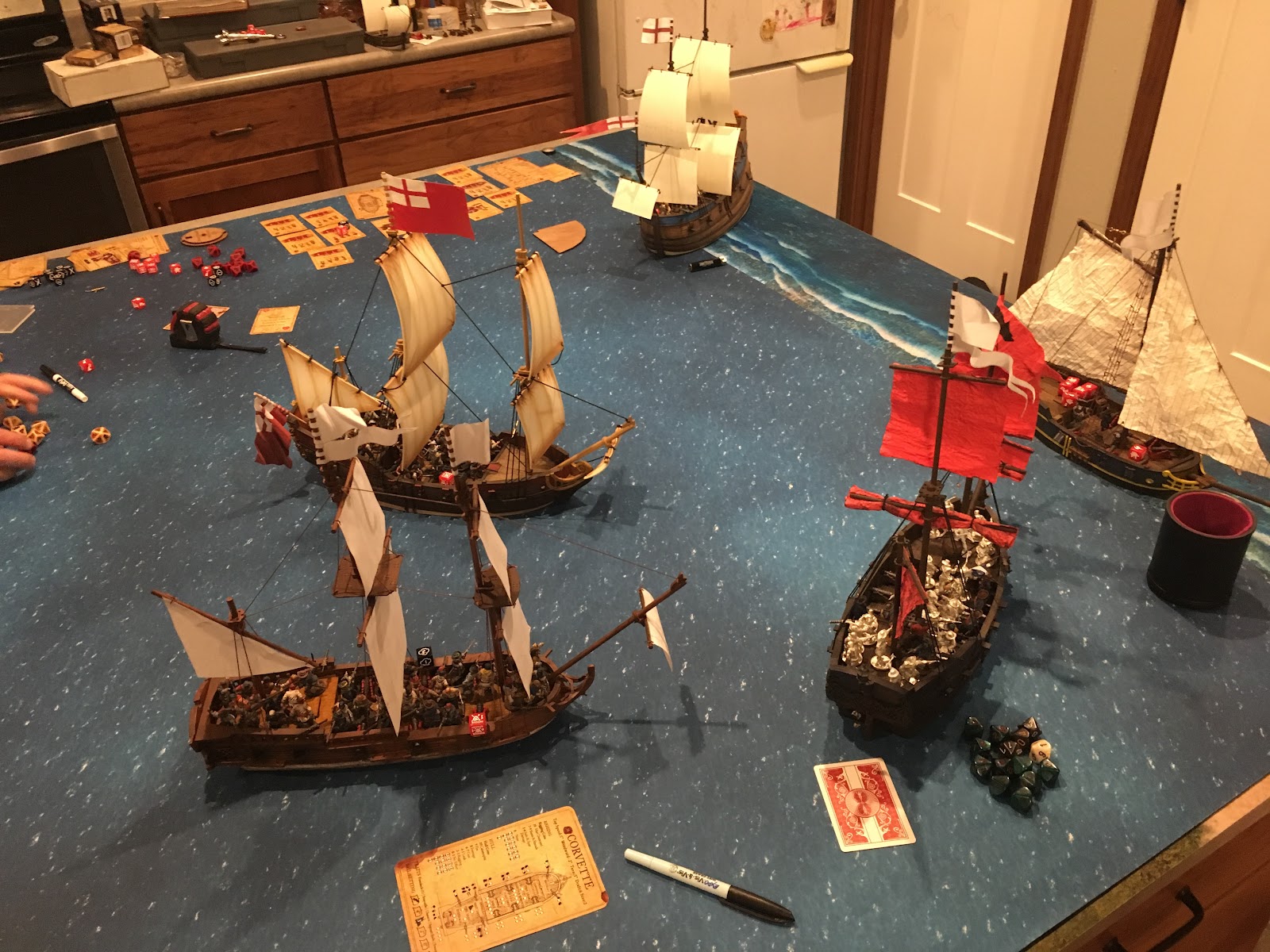 When you are building the Corvette you make the choice to remove the chasers and add a mizzenmast, taking away the Square Sails trait and its penalty to tacking, and also giving you a sail setting of 3”. You may also remove the larboard and starboard cannons on the aft deck instead of the chasers, but the kit doesn’t have an easy way to represent this. I think the ship looks better with the mizzenmast, but I also magnetized the stern so I could play with chasers on occasion. The additional sail setting doesn’t change how this ship sails much, but can be a problem when the Corvette has to be slowed to 0” quickly.

The Corvette does have a sweep value of 3”, which is fast for a ship. Coupled with the Spanish Corsairs faction, or Juan Corso’s Corsairs, you could make the Corvette move 4” under sweeps, and spend the entire match ignoring the wind, like a galley. 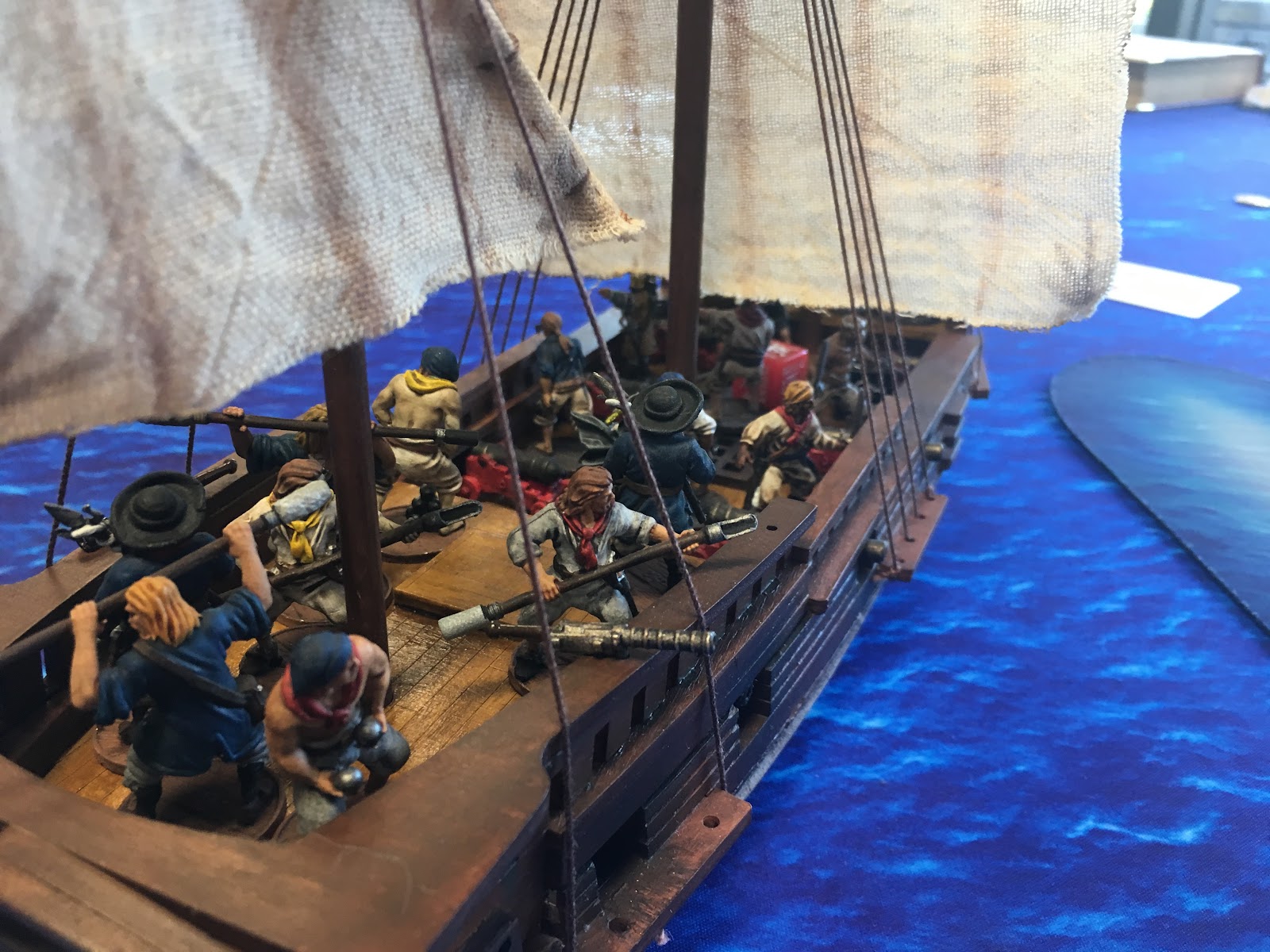 For a warship, the Corvettes Fortitude and Integrity of 4/4 is very weak. All other similarly armed vessels outclass it. It only takes 7 cannon hits to get a strike point from having lost half Hull Integrity. The Corvettes rigging is better, at 3/6.  This rigging value is shared by the Fluyt and Light Frigate and is the second strongest in the game, only surpassed by the Galleons rigging of 4/6.

With a speed of 5”, a turn value of 3”, and a windward value of -2”, the Corvette’s maneuverability is most similar to the Light Frigate or Sloop of War. Like most ships that move 5”, the Corvette will dictate the flow of the battle and distances, unless a scenario makes it start windward. I’ve found wearing to be very useful to get the main deck cannons in range, or to swing the afts four swivels as close as possible. It’s important to remember that wearing is a near zero risk advanced maneuver on a ship that only turns 3”. This is also a ship that you will want to tack with, as long as you have the mizzenmast upgrade, to get the huge 6” main deck in cannon range.

Since building my Corvette I noticed it does some strange things when turning. The ship does not have skids to mark where turns should start, instead it has a ladder that’s about 1” long. The ladder is located near the bow and swings it’s stern outside of its sailing path during the turn. The hull below the gunwales is foam you round with sandpaper when building the ship, making accurate turning harder, but also a turn radius that is only about 2” from the center of the ship. 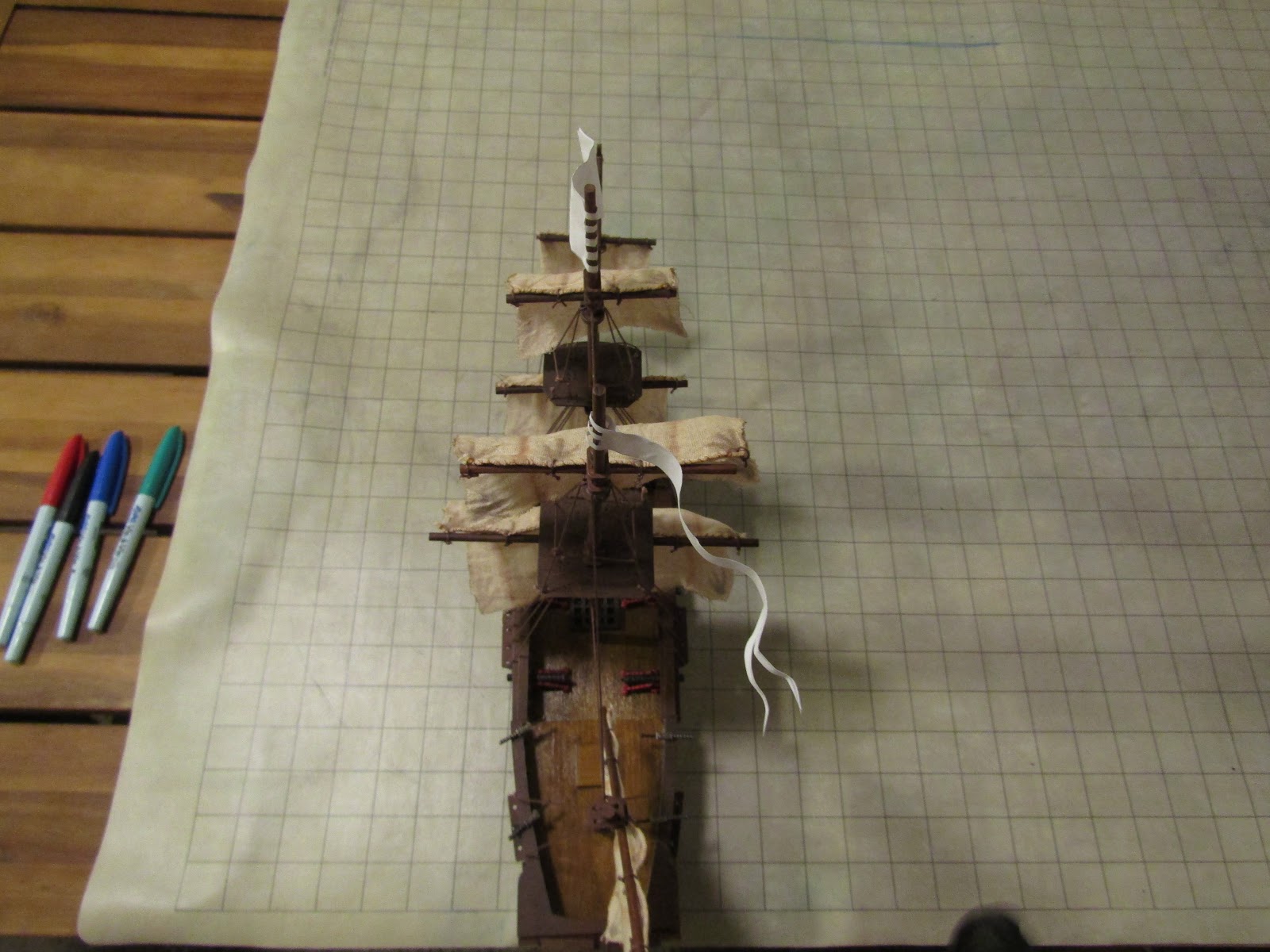 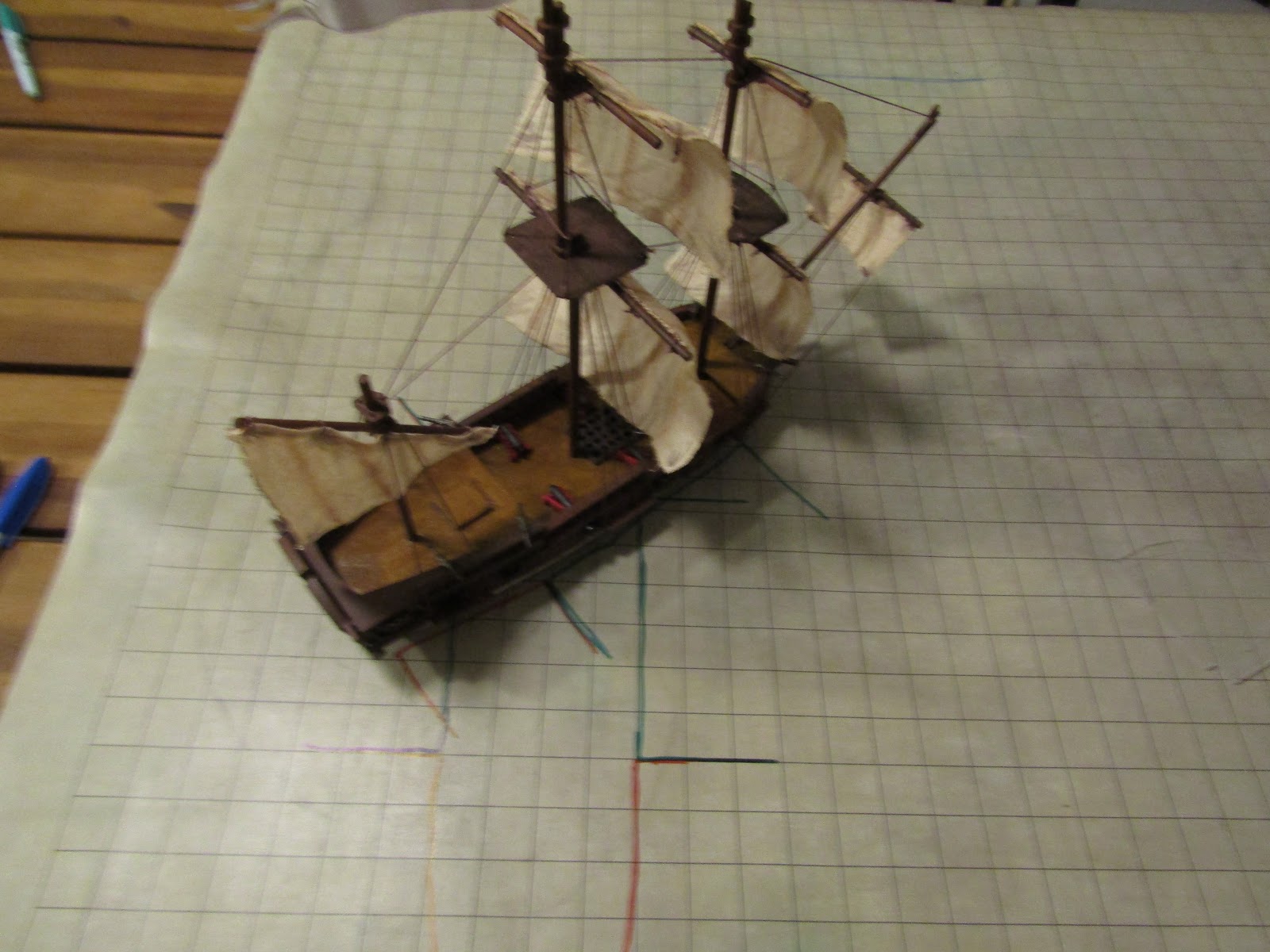 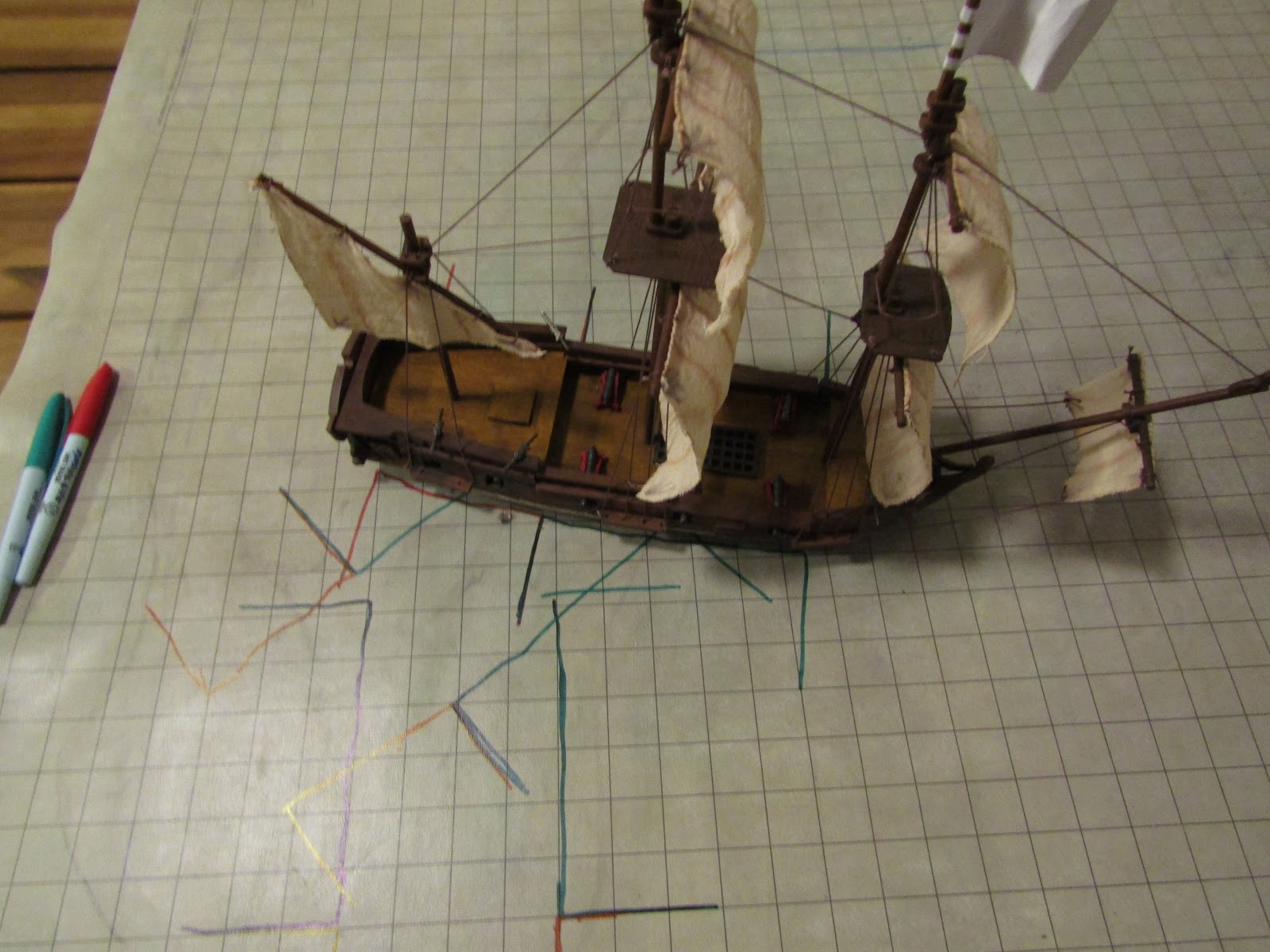 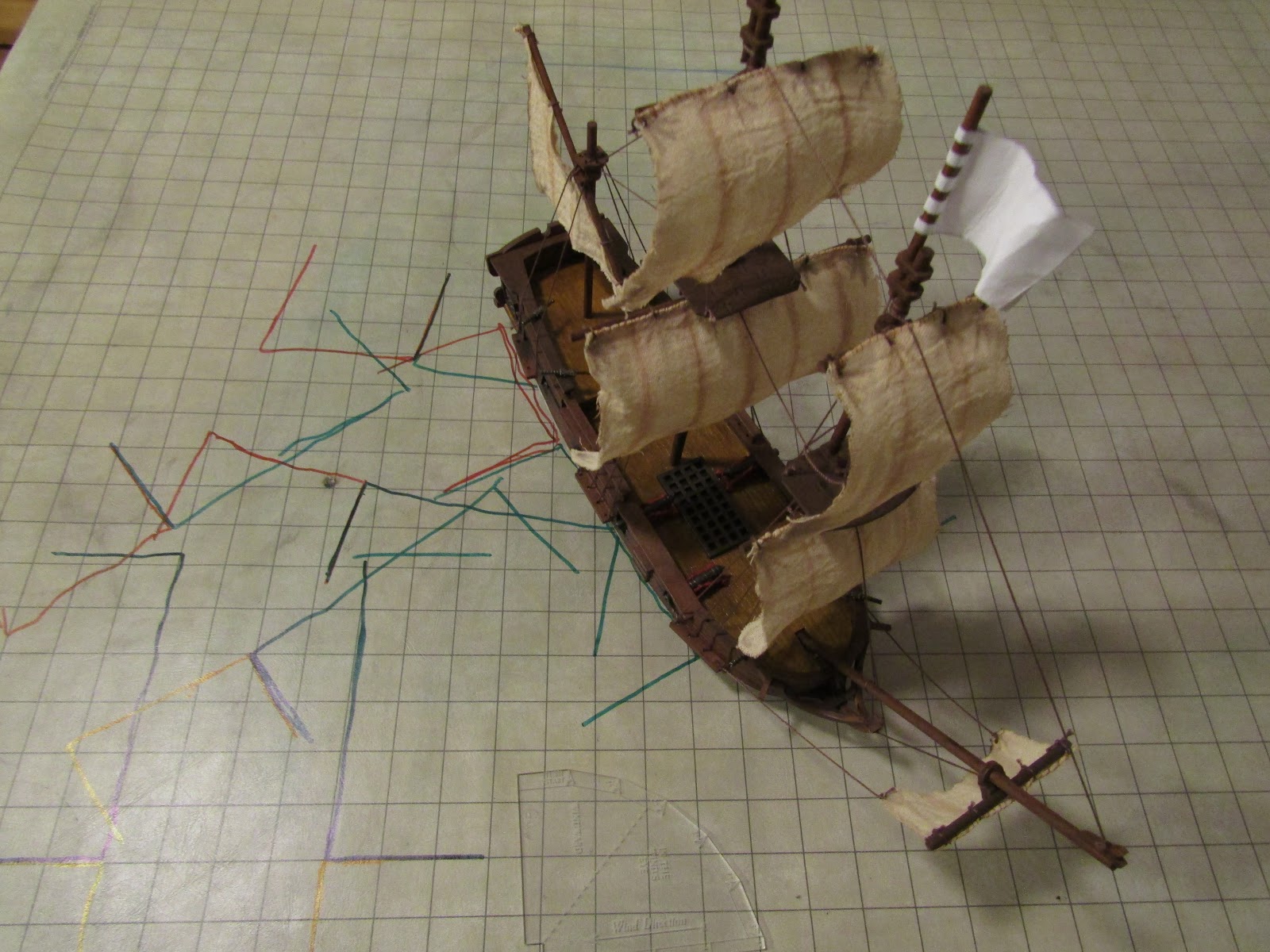 Unless you plan on docking, it’s best to set the sail speed at 5” and try out sailing your opponent rather than changing the sail settings. With a mizzenmast, it takes 4 dedicated actions to slow to 0”. I tried one game to slow to 0” and assign a crew to the sweeps and was raked twice by a bark for my trouble.

The Corvette’s main deck can have 27 models on it as well as 6 medium cannons and the aft deck can have 18. Notice I said main deck even though this is a two deck ship, as it has a Foredeck subsection that can hold up to 6 models. The Corvette also has the option of adding two Fighting Tops, and although you have the opportunity of putting them on the mizzenmast and now the bowsprit, they look best on the foremast and mainmast. This also means that you can load 7 units on this two deck ship.

The fighting tops are a fun but costly addition. You pay 2 points for each one, and they can only hold 4 models. This is the only 2 deck ship so far that can have fighting tops, and you can buy up to two of them. I’ve played with them several times since building my corvette and my opinion of them is mixed. The gut reaction to seeing the fighting tops is to put an elite musket unit in it, like freebooters or other 6 point musket units. You can only do this though when you play under 300 points, like a 200 point game, and 4 freebooter with the platform cost 26 points, ⅛ of your total cost. If you put an isolated unit in the fighting top it can be targeted individually, so a high cost unit with good saves (models in the tops still have hard cover) can still be taken out slowly through concentrated fire and attrition. Splitting a unit between the tops and the main deck is a good option, you lose out on the benefit of extra units on your ship, but it lets you control where the casualties come from. This also lets you protect your cannon crew if needs be, and maximizes command point usage.

The Corvette can take 8 cannons, 2 chasers, and 6 swivels, making it the best armed 2 deck ship, and an equal in broadsides with the Brigantine. This is an amazing amount of firepower. There are some important decisions you need to make though. To use the mizzenmast you have to leave 2 cannons off the aft deck. I’m not a fan of a single starboard/larboard cannon on a deck, but this is also a deck with 4 swivels on it, so your going to want to crew those anyways. On the other hand, with the recent point changes, you can get two chasers pointing the same direction for only 7 or 9 points. If you leave the mizzenmast off, and fully arm the Corvette, you make tacking dangerous and give up the chaser shots it can sometimes provide.

I’ve mostly restrained myself from talking about the Corvettes best feature: that it is a model you build. While assembling the masts and spars, or adding features is no simple feat on a usual Firelock Games ship model, building the Corvette is completely different. Putting models together is something that I enjoy in other game lines, and it was especially fun to put this one together. There were several places where I made a mistake, but they add to the charm of the project, and made me want to buy a second one to use what I learned. The kit also has you make a few choices when you build it. One is the mizzenmast/chasers choice. The other is what sort of windows you want on the stern. You also get to choose where to put the main and aft deck hold coverings, or you can leave them off. 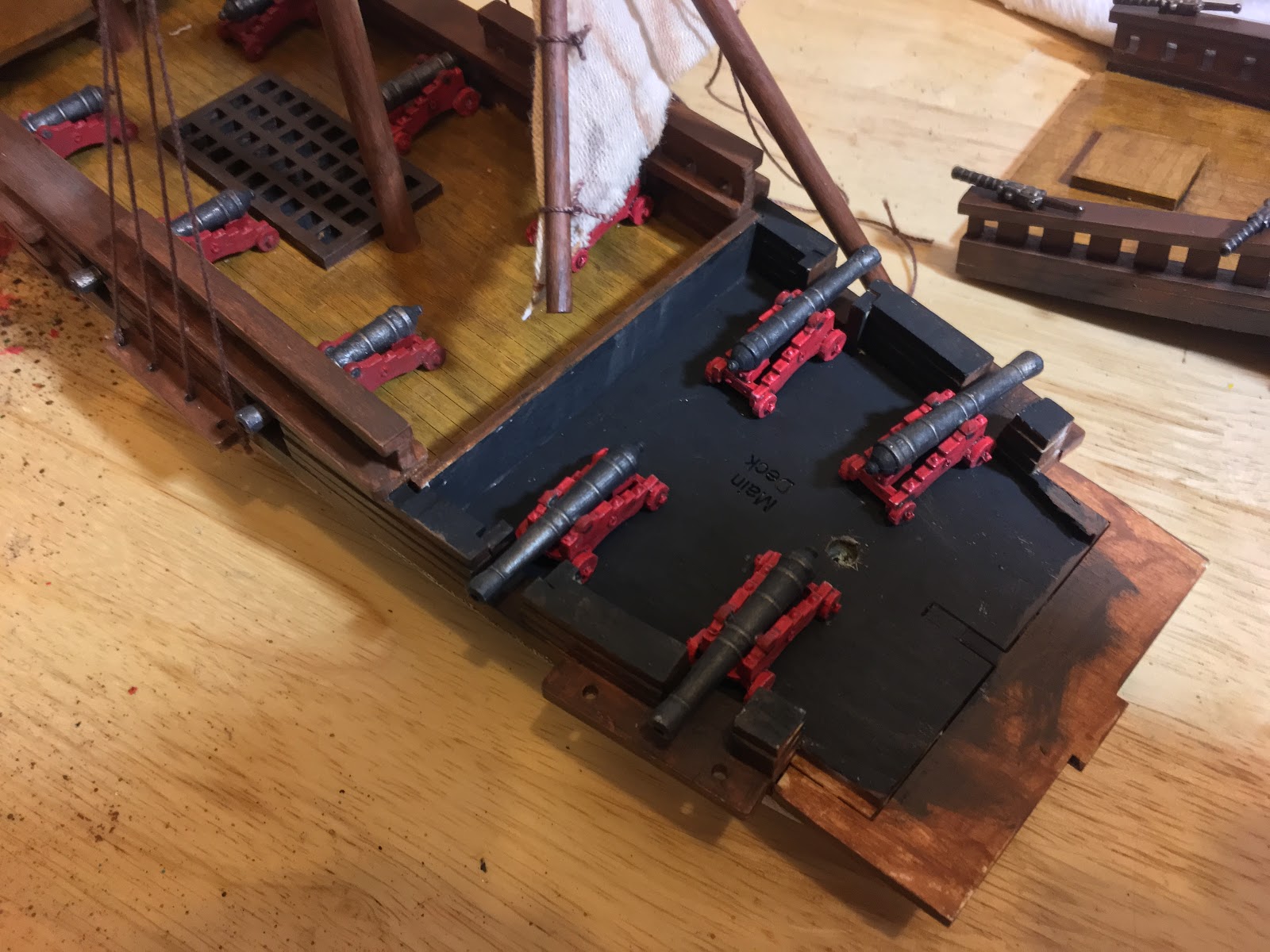 Here are a few things though that I wish I knew before: The aft gun deck takes cannon models, not stubs. If you want to permanently add cannons, leave it open, paint the inside, glue your cannons down then seal it up. Light cannons also do not fit below deck because of the barrel pitch, and did not fit in ⅔ of my gun port, though this might be because of an error I made in building. Being a wood model, it also drinks in paint. This includes washes, though it’s a neat trick to get the most out of the natural wood grain.

Uses for the Corvette

While I don’t think this should be anyone’s first ship, it is a great option for 200 point sea battles. Only the Light Frigate, Sloop of War, Corvette, and Piragua naturally move 5”. That is mostly why it is 15 points. I find that the Corvette should be played as a nimble gunship/musket platform, in much the same way as the Sloop. Try keeping the units on the ship around 3-4 to accentuate the amount of distance the ship can move. Also don’t be afraid of turning windward to slow down, or to swing the stern close for a devastating 12 dice swivel volley. If your up against a cannon heavy list, know that you can’t take more than one or two broadsides, and focus fire on the enemies gun deck. Like usual.

Here are some sample lists I made:

This 100 point English Royal Navy list is light on models, but brings 10 light cannons to the fight, more cannons then you usually should

Here is a 200 point Spanish Corsair list that is a fairly typical gunship, except the Marineros Piqueros are intended to crew the sweeps. It doesn’t have a mizzenmast to allow you to raise the sails quickly if you need to.

The French Caribbean Militia is a fun faction that specializes in high quality musket shot. This 200 point list forgoes cannons and the foredeck to put Boucanier in the fighting tops. It can throw 33 dice at a shoot score of 6 or lower.

This Dutch Navy list uses the versatile Admiral Crimson. It also is a way to give the Corvette the Heavily Built trait.

This final list uses the Danish Militia at 350 points. My local group has settled on 350 for big ship battles, and this list does everything the Corvette can, while also having the sneaky goal of boarding.

I’ve really enjoyed playing and building the Corvette. With the recent dethroning of the Privateer Sloop as the go to 200 point ship (Swift getting nerfed), I’ve been using my Corvette more often to take advantage of its amazing 5” speed. If you don’t have a Light Frigate or a Sloop, get one of those ships before the Corvette, as it can fill the role of the one you don’t own to varying effect.

3 thoughts on “Ship Overview – The Corvette”