After a drought of about 5 weeks or so of no real Blood & Plunder games (excluding the demo day earlier this month), I got 2 solid games in with my friend Guy this weekend. Here’s a report on the 200 point land game that pitted the French Expeditionary Force against the South American Natives.

My group is preparing to run a 200 point tournament in March and these games presented an opportunity to test a couple of the lists I’m thinking about using for that event.

I’ve been working on getting a Native force painted up since I got my NPBtL Kickstarter in September but this was the first time I’ve played a full-fledged Native force on land!

None of these special Native rules effected me much in this game. I chose the South American Tribes faction because they apply the Elusive rule to all their units, they have access to Poisoned Arrows and they don’t have Sound of Thunder which seems to make Natives pretty shaky and lose a lot of the built in action advantage that the bows usually give them. I’m planning to use this faction for my next campaign so a little experience with them is good for me! 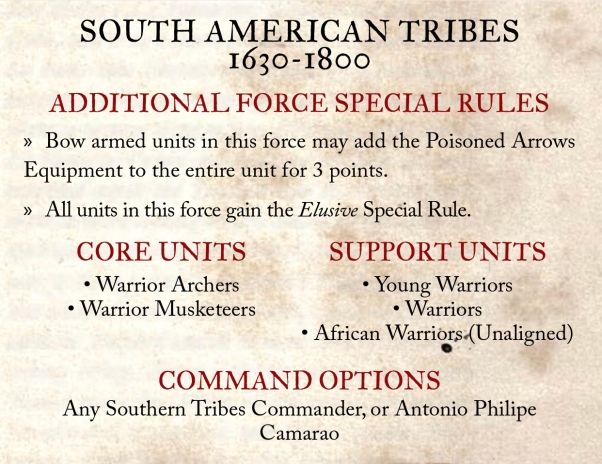 Most of the Native units have a relatively weak resolve of 6 so I spent the 15 points to get the experienced commander with Inspiring. The Great Warrior trait seemed good to give to Warrior Musketeers to improve that shoot skill when they fire so I attached him to a unit of 10 Musketeers with a Sharpshooter character.

My other key unit was a group of 8 Warrior Archers with a Grizzled Veteran and Poisoned Arrows. The Veteran let me shoot twice per turn to make the most of the Poison and then she’s the Fatigue with Tough.

Hoping to make good use of my Spades, I added a unit of 10 African Warriors who I hoped would do some solid skirmishing and then run in to finish off weakened units with their Quick rule.

To round out the 200 points I added another group of 5 Warrior Archers.

My force had 4 units totaling 34 models with Strike Points at every 8 casualties. 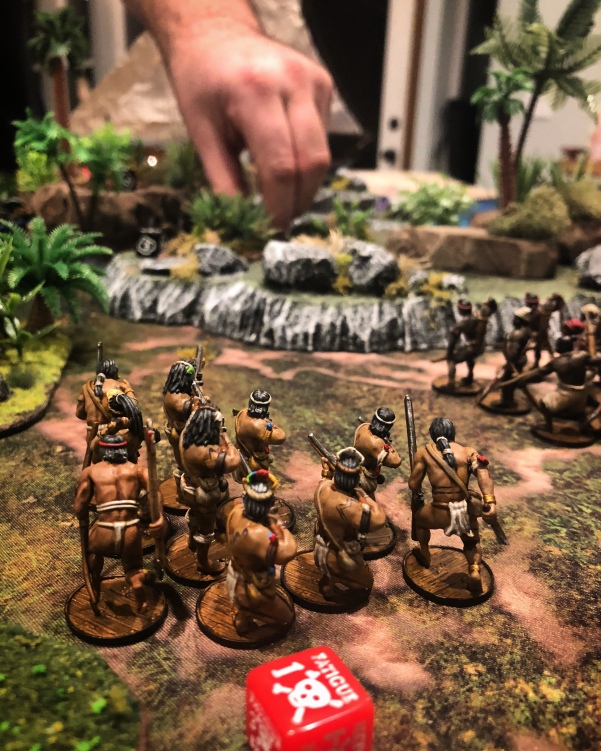 Guy, my opponent used the French Expeditionary Force led by one of its historical commanders, Jean Bernard Desjeans. The Expeditionary Force already has some diverse list building options but Desjeans makes it even stranger with the ability to use all Support units as Core units! At 27 points this commander is a deal for the 3 command points, but he lacks Inspiring and has a couple restrictions on how he can use his command points which puts some restrictions on his army building. But this list was all about cannons!

Three units of 4 Trained Artillerie Milice  with a Master Gunner and a Light Field Gun with grapeshot formed the heart of the force. The commander was attached to a unit of 12 Trained Milices de Caraibes and 2 units of 6 Inexperienced Miliciens rounded out the list. 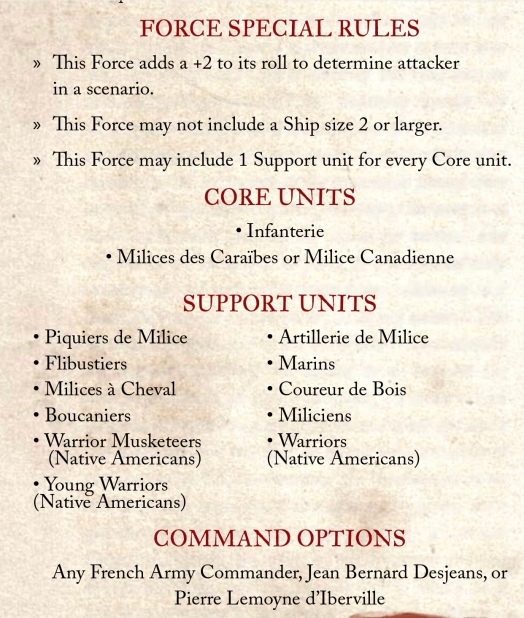 The French army had a total of 36 models in 6 units which put their Strike Points at every 9 casualties. Even with 3 cannons and a historical commander he managed to get more models into his list than I did!

We randomly chose the scenario and it came up as Encounter. My kids very enthusiastically helped set up the board before heading off for their bedtime. 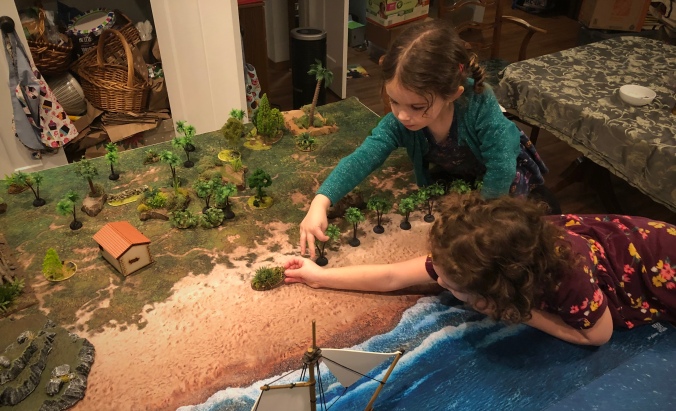 The French had a +2 on their attacker role but Guy rolled a 10 anyway so I was the defender.

I chose my corner of the board and then had to place half my force first due to Desjean’s Careful Planning ability. 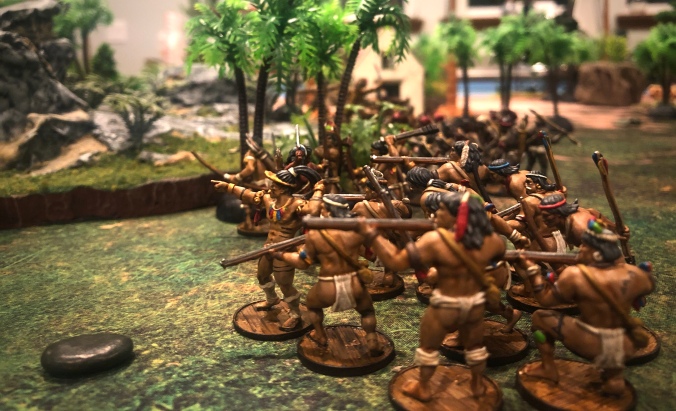 I deployed my troops behind a rocky hill with plenty of cover and obstacles between me and the cannons while Guy deployed the French behind some rocks as well, ready for a two-pronged assault. 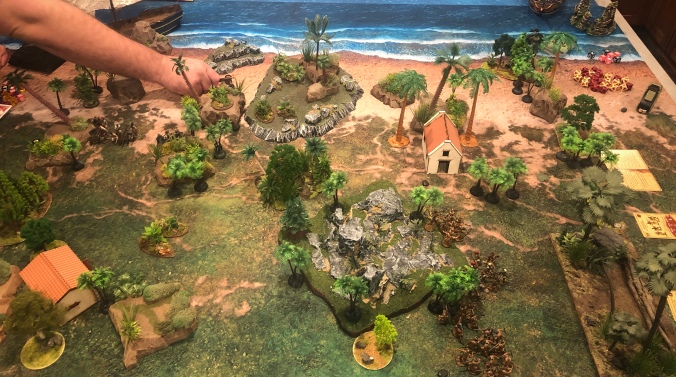 With all units in place we started the game! 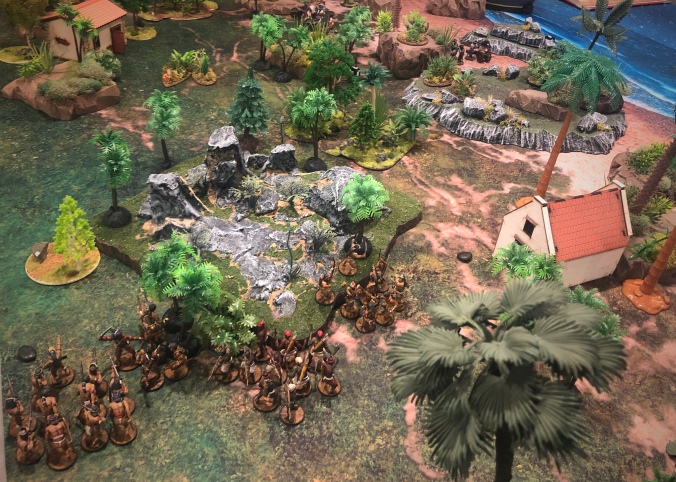 The first turn was spent moving units into position. With only 4 cards in my hand, I delayed activating a couple times just to let the enemy get closer before committing my troops to moving forward. The cannon crews pushed their pieces forward a full 7-8″ with low initiative cards and covered most of my corner of the field by the end of turn 1. 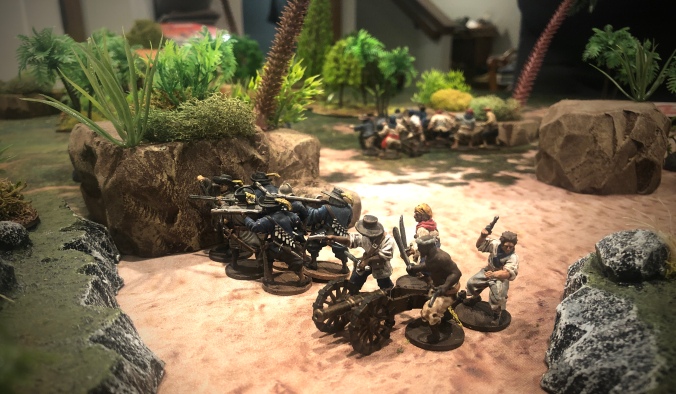 I moved all 3 Native units up and let off a couple volleys is arrows with my archers. The poison started to work it’s magic and I while I didn’t get any kills, I got a couple points of fatigue down on some Militia and artillery crew. 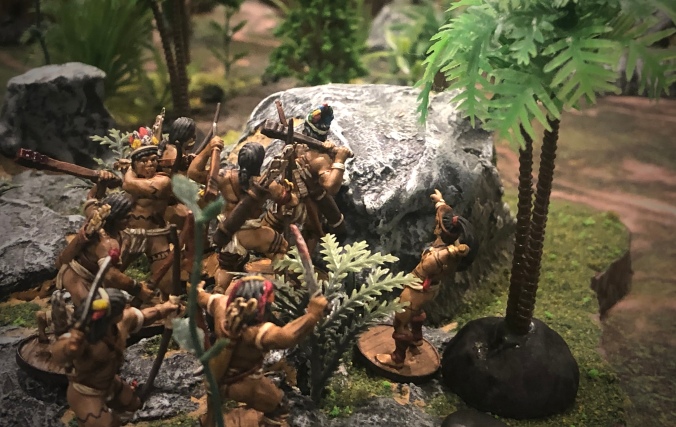 I pretty much entrenched around those rocks and the cannons fired at me several times over the next two turns but the hard cover combined with Elusive and a 6 Ranged Save made the Natives hard to actually kill. That small unit of 5 archers got hit by at least 4 cannons shots totaling at least 10 hits and only lost 1 figure (until the 5th turn when they were eliminated). 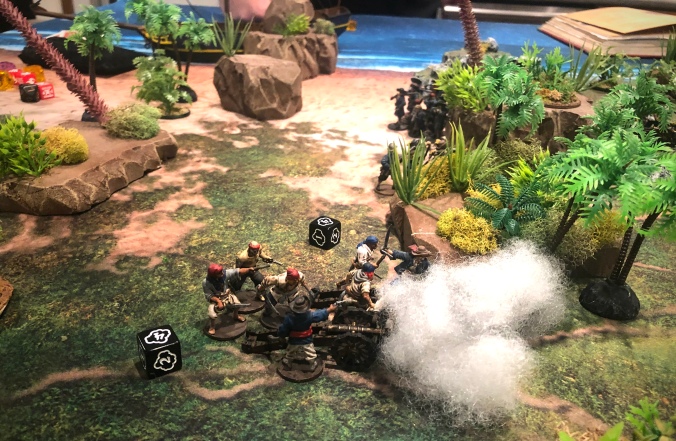 My Africans had pushed to get off a shot in the first round and the cannon caught two of them in the open and killed one of them and they promptly failed both Fatigue checks and became shaken at the beginning of turn 2. This basically removed 60 points of my troops from the battle for a couple rounds as they proceeded to fail a couple rally attempts moving into the middle of the game. 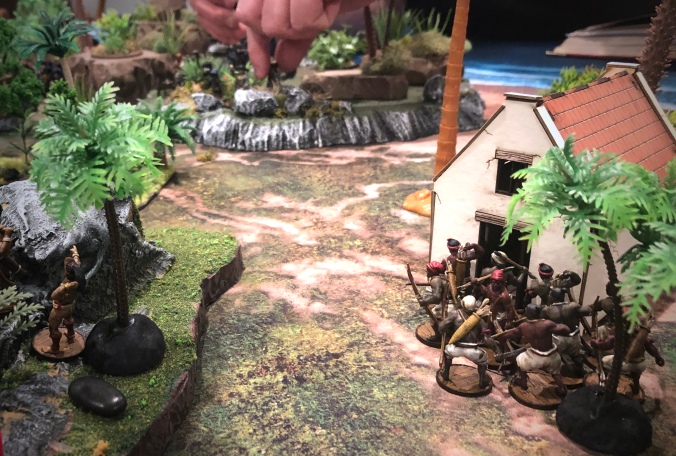 Desjean’s large group of Milicies de Caraibes let off a volley that killed one Native and my first Marksmen volley with my command group was just as ineffective. Overall, the first 4 actually turns were fairly bloodless with only a few models dying but plenty of Fatigue points being applied.

Things started to get serious in round 4 when the Milices de Caraibes fixed bayonets and moved forward to charge. My Musketeers were able to move into position for a nice Great Warrior volley and landed a solid 5-6 hits on them. The French saved well but still broke and retreated.

This left my most valuable unit exposed and a group of Miliciens tried to charge my flank on the first activation of the next turn. I panicked for a minute before remembering I could Evade! Since I was at 2 Fatigue (I pushed to get that volley off earlier) my commander’s unit became shaken but that’s much better than getting charged by 5 militia and saving on 8’s! 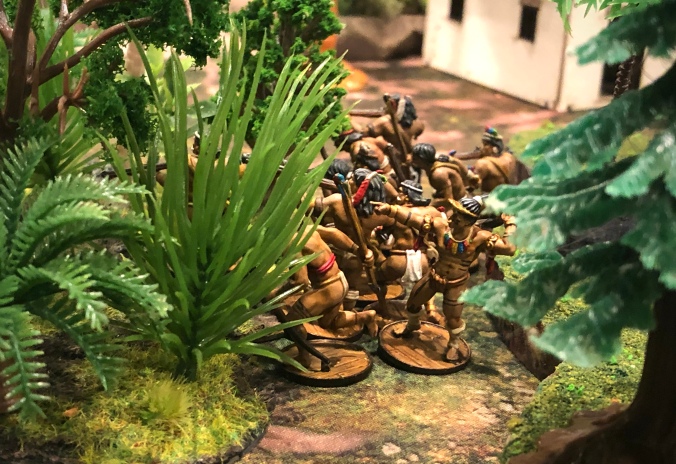 This left the French Miliciens exposed and those hardy archers who had withstood so many cannonballs charged them, killed a couple models and routed the unit, then shot their arrows into the nearby weakened artillery crew and eliminated that unit as well! I think they finally got hit by a cannon right after that and were massacred but they earned great glory! 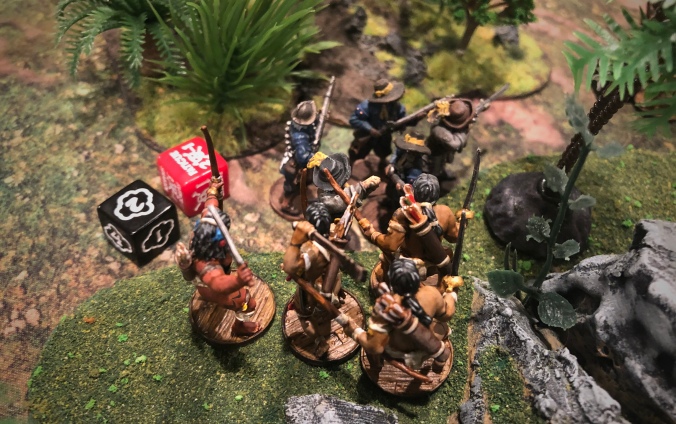 My command group of Musketeers was immediately charged again by the other unit of Miliciens but it Evaded again moving up to 4 Fatigue. 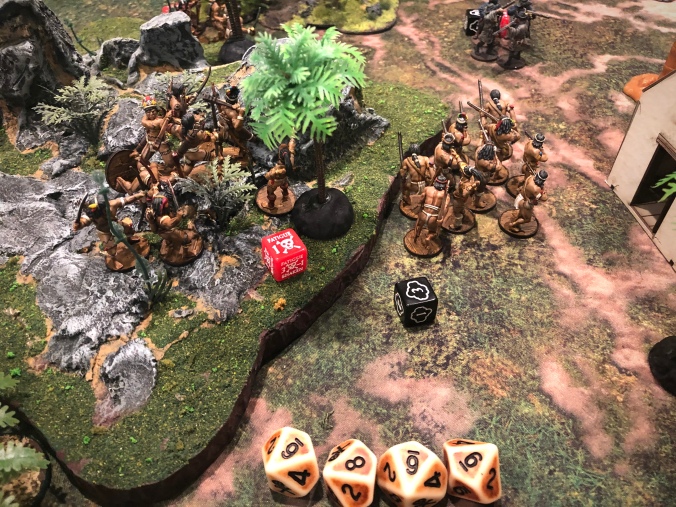 Later in that round my Grizzled Veteran was able to remove all 4 Fatigue in one rally attempt and the Musketeers reloaded so they were fresh going into the final round. 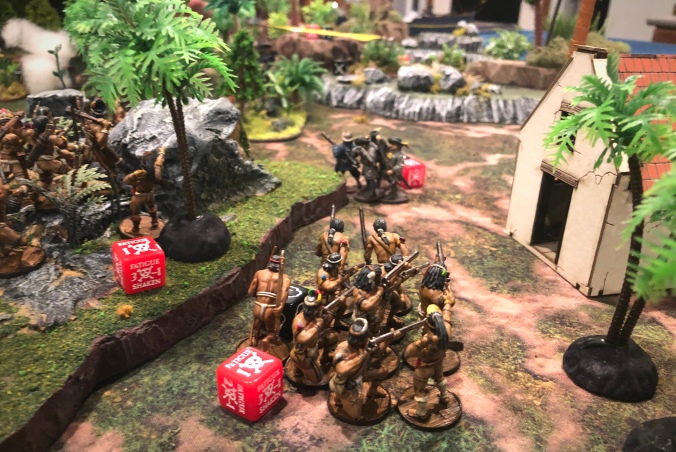 Going into turn 6 my Musketeers fired another Great Warrior volley into the unit of Miliciens that had charged them previously and eliminated the unit.

With Fatigue and reloads on the surviving French units, Guy used turn to 6 move troops back behind like the rocks but arrows finally landed some effective hits on a second group of artillery crew and took them out. 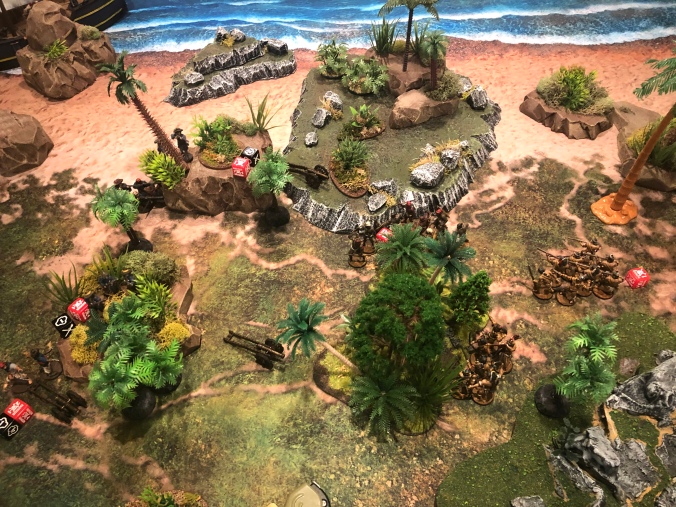 At the end of turn 6 neither of us had 2 more Strikes than the other. The French stood at 2 Strike Points with 22 casualties and the Natives has 1 Strike Point with 9 casualties. 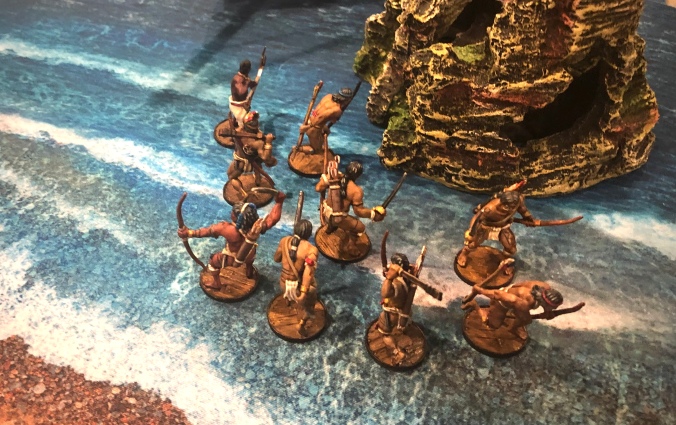 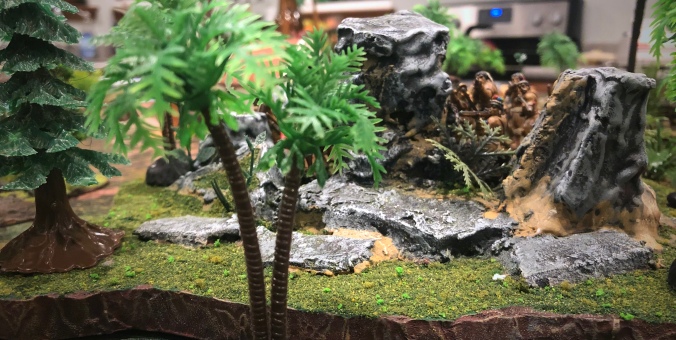 Musketeers hiding in the rocks 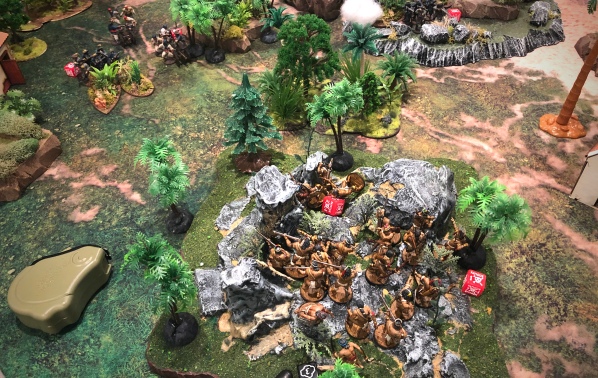 I had three units hidden in these rocks for a good deal of the game.

Thanks to Guy for a good game! I’m looking forward to bringing these Native South Americans through an entire campaign!

How have you found the Natives so far? Which Native faction has worked for you? Have you built any strange lists using Desjeans’ ability? 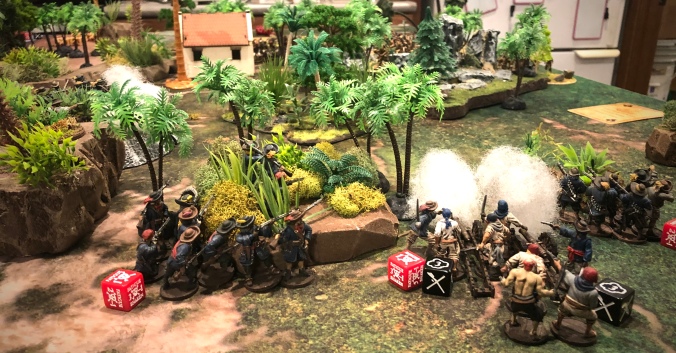