I got to help run another Blood & Plunder demonstration at a local game store! My club hosted a demo day in my home town of Oregon City back in November and we made some contacts that opened up an opportunity to run this demo at Next Level Gaming, a brand new store in Salem, Oregon.

It was a busy, busy afternoon and Chase and I ran demos back to back from the moment I got there until well past the store’s closing time! 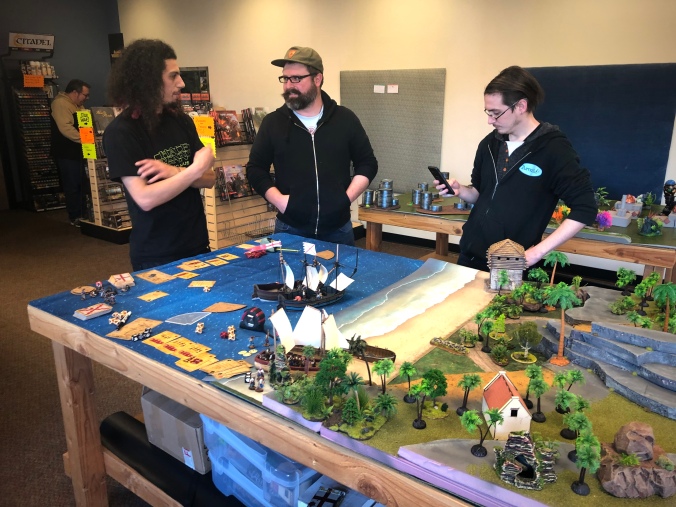 Our previous experience running a demonstration taught us that people are most interested in sea battles so that’s what we focused on for this event. I wish I had got a chance to set up a couple land forces on the mainland just for show, but there was someone waiting to play when I got there (90 minutes before the demo was supposed to start) so I abbreviated my setup process.

We were using only my models so I put together Spanish Guarda Costa and English Buccaneer 100 point Bark lists to face off against each other.

I tried to build lists that were a little asymmetrical to showcase some of the faction differences and I probably made them more complex than is ideal for a demo but people seemed to be ambitious and enjoy it! 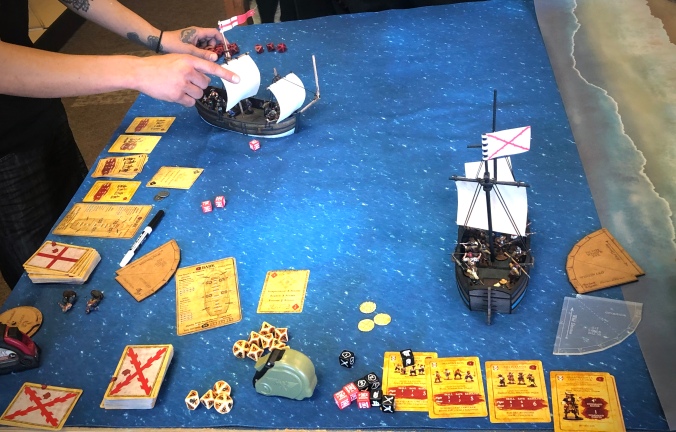 While these aren’t the simplest lists you can build, I felt they gave both sides some unique elements and showcased the differences between experience levels and weapon variety. The 3 units per ship made ship movement easy since they had to move in every activation and Barks make explaining Saves very easy since they provide cover but not hard cover. 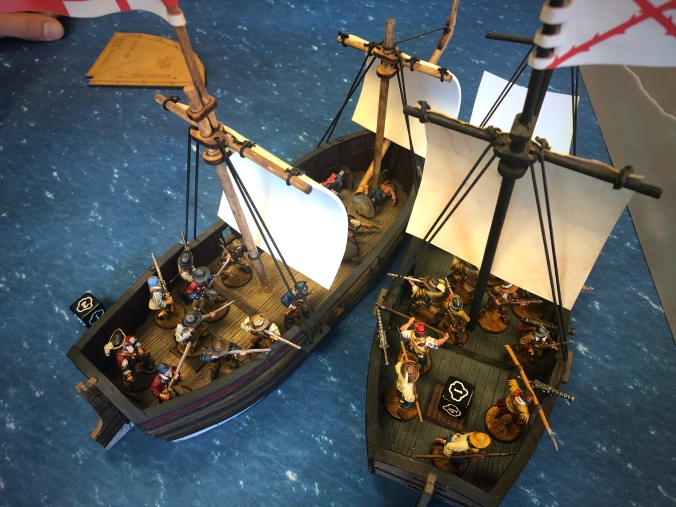 I set up a 6×4 board with space for land and sea battles but we played the sea demo exclusively on a 3×4 area.

We had interest in both the Spanish and English and even the Scottish factions but a majority of the players expressed interest in picking up the Dutch faction. 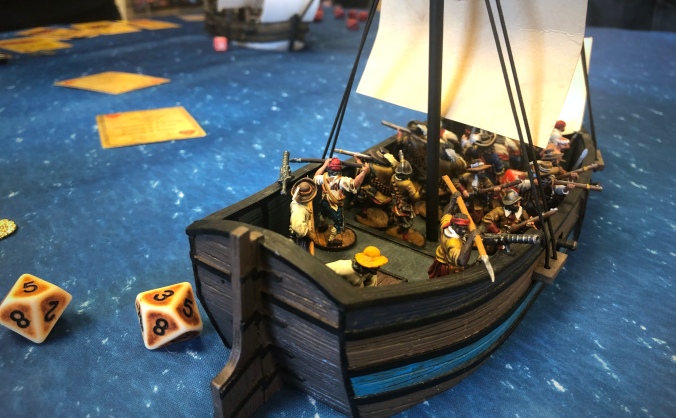 I tried to configure games so players would experience cannons fire, musketry, swivel guns and some melee combat. 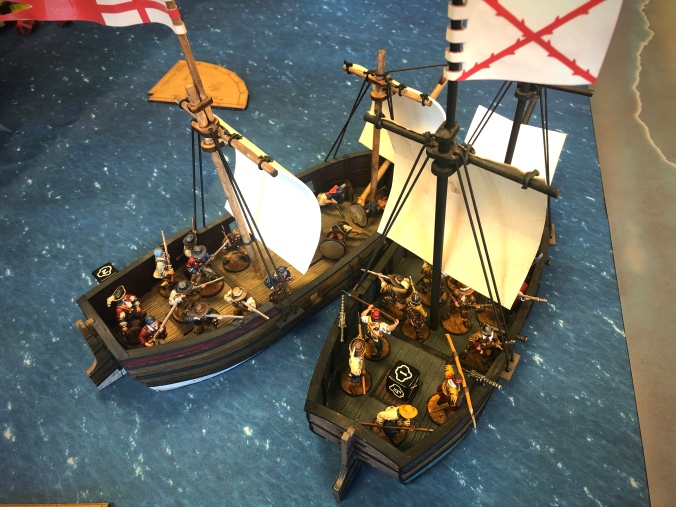 The games were basically Encounters which were evenly fought down to nearly the last man. I’m not sure there was a moment in all 4 demos were one force had two more strike points than the other!

The Spanish player always had a chance to fire off the cannons early, then the English player could rush up fairly quickly and try to board the Spanish ship. I may have made the space a little too small because the Spanish ship never managed to shoot its cannons twice in a game! But I needed the games to go rather quickly so maybe that was OK… 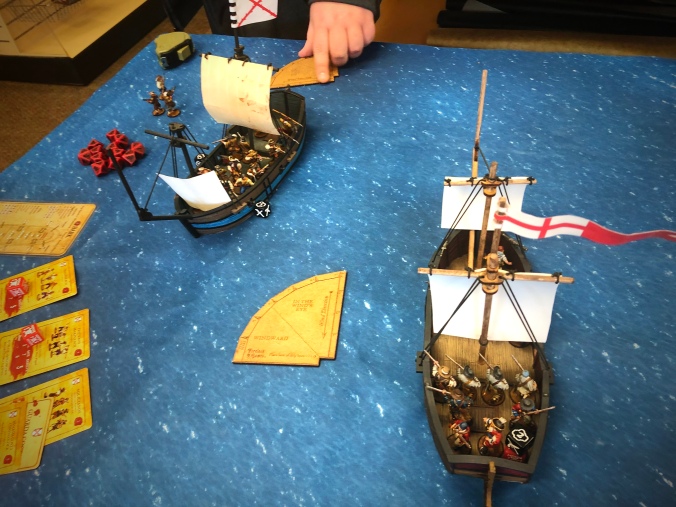 I brought along my Fluyt to catch attention but we didn’t use it for any demos. People kept joking about it being a raffle prize which I didn’t appreciate… 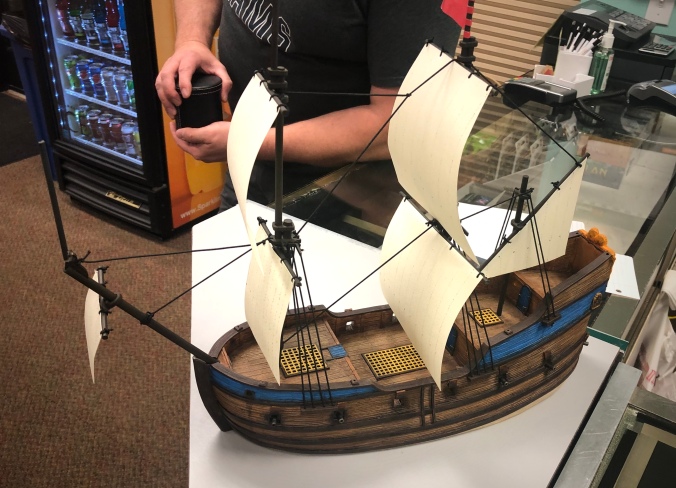 All 4 demos I ran were fairly dramatic games which came to melee where crazy things can happen. That group of Marineros Piqueros was super tough in one game the 2-3 remaining models drove back a much larger force of Freebooters (only to be blown to bits by Dutch firepots). 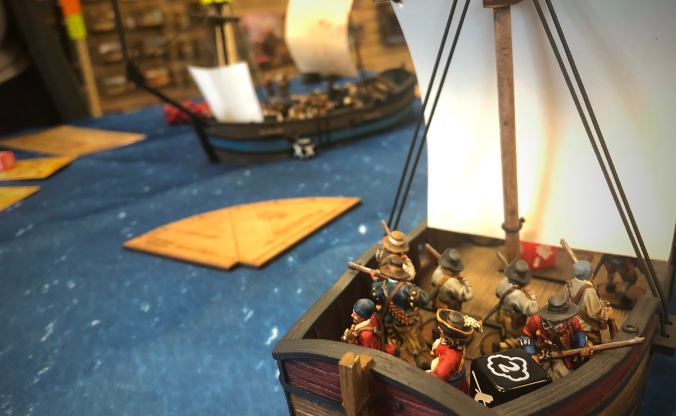 I used my Captain Morgan figure for the Inexperienced English Commander.

Both forces won games, but the English list seemed a little stronger in the scenario I had set up. The Spanish Militia tended to melt pretty quickly under Swivel gun fire and be susceptible to an undefended charge later in the game if they accumulated too much Fatigue.

With only 4 models in the Enter Ploeg unit, they tended to be whittled down by the time they got close enough to do much, but they still decided a couple encounters. People loved throwing those Firepots! In one game 3 ship decks were on fire at the same time! There was a single Dutch model left when the Spanish boarded the English ship and he threw a Firepot into the forward deck of his own ship, lit it on fire and drove the Spanish back, then threw another Firepot into the Spanish ship and lit it on fire, then the fire spread to the second deck of the English ship! People really enjoyed the option of a “safe” grenade toss vs a risky one that could blow up in your face (that happened once and of course, it lit his ship on fire!). 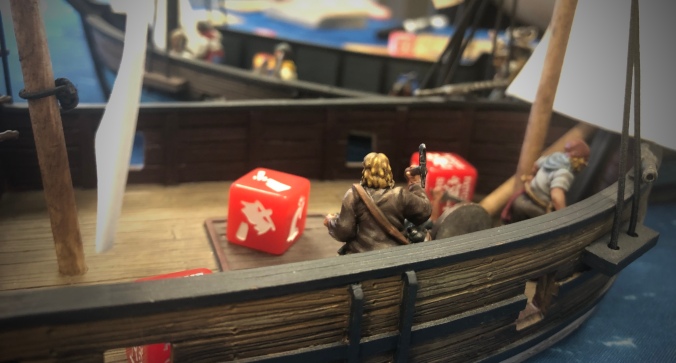 We met a variety of people interested in the game. The regular crowd at my “home game store” is pretty saturated and is very reticent to even think about jumping into a new game but everyone we met at this demo seemed ready to buy in which was awesome!

I ran the demos and Chase did a fantastic job fielding questions and helping people decide which nationality might be good for them and he helped people pick out product that would work for them. We made a good team! 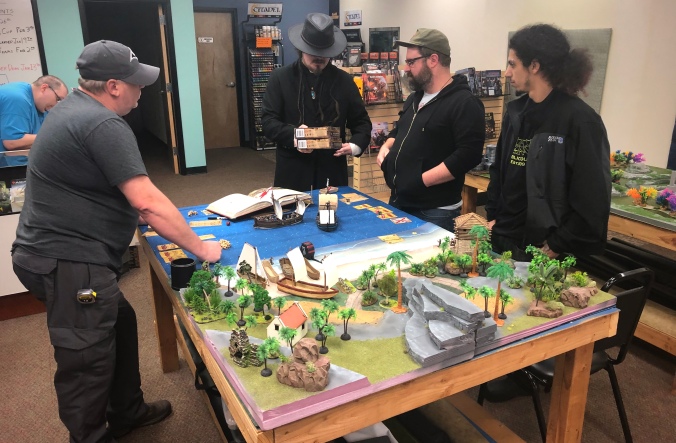 With a couple teaching experiences under my belt, I felt like I did a better job explaining the rules and running the demo overall, but I had to try to alter my approach depending on the person taking the demo. The ship movement being divorced from unit activation still seemed to be the most confusing element for people to grasp. I tried to make it simple by giving each force three units so the ship would move with every activation, but I still got a lot of questions about if they move before or after the unit activates or if an action was necessary to move the ship.

One player had already read the entire rule book which made my job much easier! Another player had vast wargaming experience which made it easier overall, but he kept comparing mechanics to other game systems but I couldn’t confirm what he was thinking because I haven’t played Bolt Action, Flames of War, Saga, Black Powder or any other miniatures game! 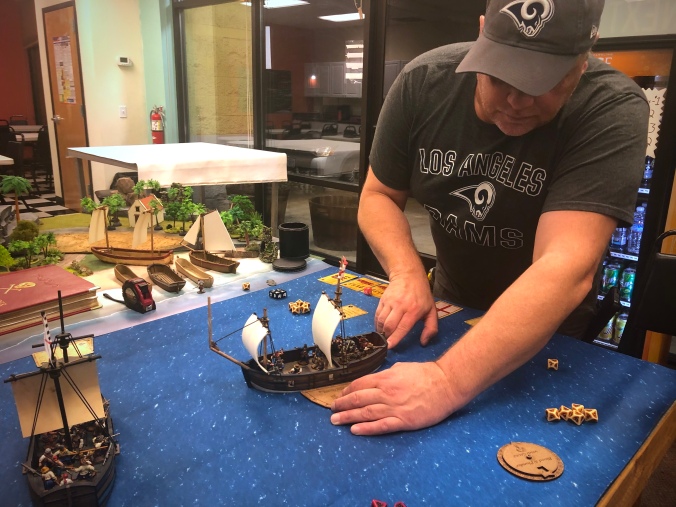 We counted this demo day as a success! We played 4 full 100 point naval games and 5 people seemed to be ready to buy in and start playing! Chase and I were counting on some slow moments to play a couple games with each other but we literally had no time between demos the entire afternoon and the game store stayed open an extra hour just for us! They even asked us to come back again for another demo because several interested people couldn’t make it on that particular day.

I had a great time seeing people enjoy the game but I completely wore myself out. 7 hours straight standing and talking with no break was a rigorous experience!

My local club is about to start a new campaign and several people asked if they could participate. While the extra rules of the campaign add an additional level of complexity, its a good way to help new players play regularly with some more seasoned players so I hope that works out and we’re able to help get a new “cell” of Blood & Players started in Salem.

Thanks to Chase for his invaluable help,  Next Level Gaming for inviting us to their store and supporting us with snacks and beverages and to Firelock games for making a great game that people enjoy!

4 thoughts on “Demo Day at Next Level Gaming, Salem, Oregon”