My friend Bryan and I have been trying to dig into the new factions from No Peace Beyond the Line and we both got to try some new lists in this 350 point naval game. This turned into a fast, bloody and brutal game that only lasted a couple rounds!

We rolled a d10 on the campaign scenario table a rolled a 9 which is Search and Recover. We placed the 3 objective markers as outlined in the setup but I won’t spend time going over the scenario because we ended up just fighting each other and ignoring the objectives.

My friend Bryan bought heavily into the Dutch during the last Kickstarter but he ended up playing Brethren of the Coast for our campaign for the last several months so he’s just starting to run real Dutch lists.

He chose the Ships of Hoorn faction ability which gave his Frigate the Heavily Built trait.

He brought one of the biggest Dutch commanders available. The 3 command points are always worth that high 30 point price tag in games this size and Very Inspiring would prove crucial in this game.

His list was light on cannons with only 3 medium guns in the mid section of his Light Frigate, but heavy on muskets and boarding units. The core of his force was a giant unit of 14 Zeelieden with a Master Gunner on his cannons and 8 nasty Enter Ploeg with 2 Firepots and 2 Grenados and a Reformado.

I chose the Armada de Barlovento. With Soldados and Marineros Piqueros as Core Units, I really like their options, but their units keep Poorly Equipped which can be annoying. I’ve been able to work around that in my last few games but it proved a big problem in this game. Soldados are some of my favorite units so I upgraded a unit of 12 of them to Veteran. An Expertly Drilled Ruthless shot with those guys can really mess you up!

My commander was the “budget commander” that just might decide to die. Andres de Ochoe Zarate is old and Feeble and if he ends his activation with 2 Fatigue or more, you are forced to roll a d10 to see if he dies. But he’s such a good deal for 20 points… My plan was to keep him in the Gun Sloop a good ways from the enemy and he can still hand out command points with a 24″ command range.

This was my first attempt at using 2 Sloops. My idea was to have one cannon ship and one boarding ship. I put my commander on the Sloop with 3 Medium Cannons and 2 groups of Marineros with Master Gunners and loaded up the Privateer Sloop with Marineros Piqueros (with a Master Gunner), Veteran Soldados (with a Son of Neptune), Marineros (with a Reformado) and Light Cannons with Grapeshot. I decided to use the Privateer Sloop for its 5″ speed so I could dodge cannons and get up close, shoot off my grapeshot, fire a Expertly Drilled volley and charge in with the lances. 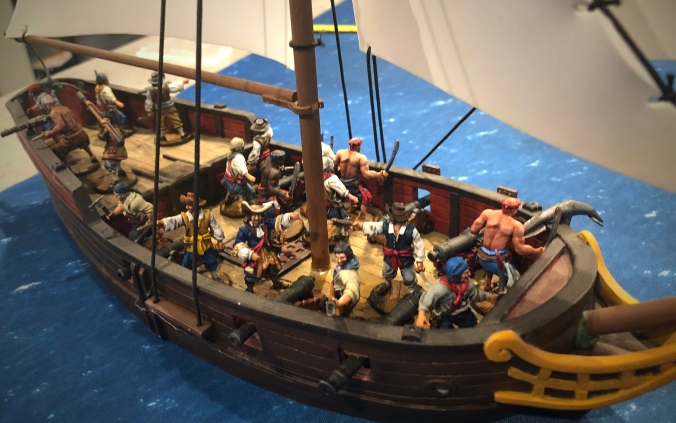 All the Characters and cannons wouldn’t fit in the screenshot.

We deployed in a 4’x4′ area as the scenario suggested with the wind at our backs. Our deployment zones were 8″ from the corner. I set up my Gun Sloop as far away as I could and set up the Privateer Sloop so it could close with the Frigate as quickly as possible. 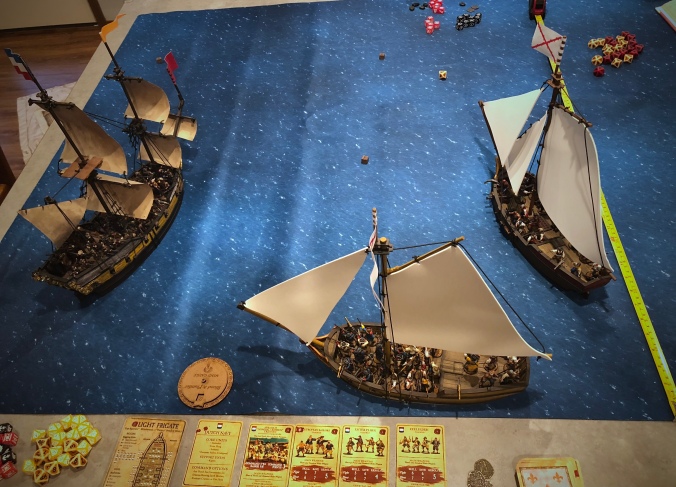 My Gunboat Sloop was set up well to grapple the objective tokens, but that never happened.

We both drew event cards in our opening hands! Bryan got a random Sails and Spars lucky hit on his rigging and I rolled a Wind and Weather change. This moved the wind direction one edge counterclockwise which gave me an advantage but it also gave us some Light Rain which gave all gunpowder weapons an extra reload marker. 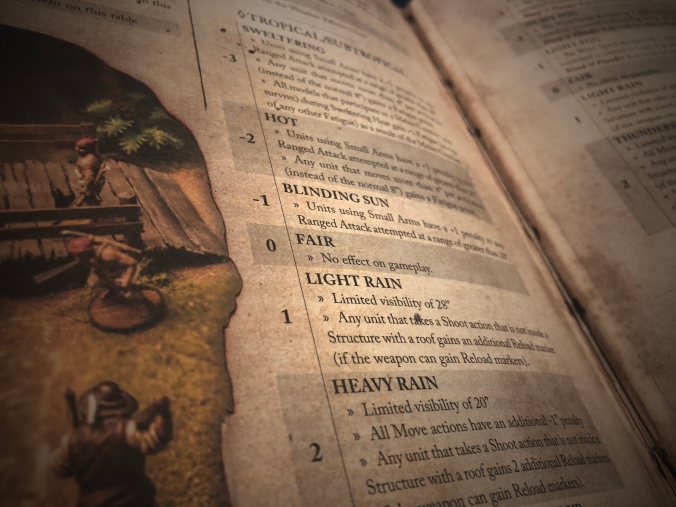 I bid low with a club for my opening card and Bryan bid high. We started within cannon and musket range and he fired off his cannons and 3 units of European Sailors with muskets. At that range he was looking for 9-10 with the cannons and 10 with the Muskets and the entire volley didn’t produce much damage but it did get on hit and some Fatigue on my Soldsdos. I shot off 2 swivels with the Soldados and did some damage to the 2 units in the back of his ship.

I bid high with my second card and moved both my ships in closer and let off my commander’s rain of shot. My cannons made contact but ended up only getting 2 hits and one of those was canceled by Heavily Built. I used command points to shoot 2 more pairs of Swivels which got the 2 Fatigue down I needed to shoot my Ruthless Soldados.

12 Ruthless Soldados at 9″ landed some solid hits and forces the Dutch commander’s unit to go prone. 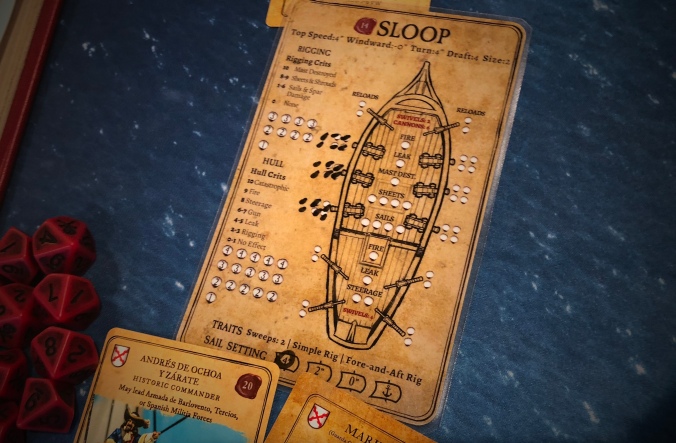 I drew a handful of Clubs on the first turn. Between Poorly Equipped and the Light Rain, I had 6 reloads after firing my cannons!

With my final card of turn 1 I moved up close to the Frigate and shot off my grapeshot rolling 6 hits. Both units in the Frigate’s rear deck ended up badly shaken. 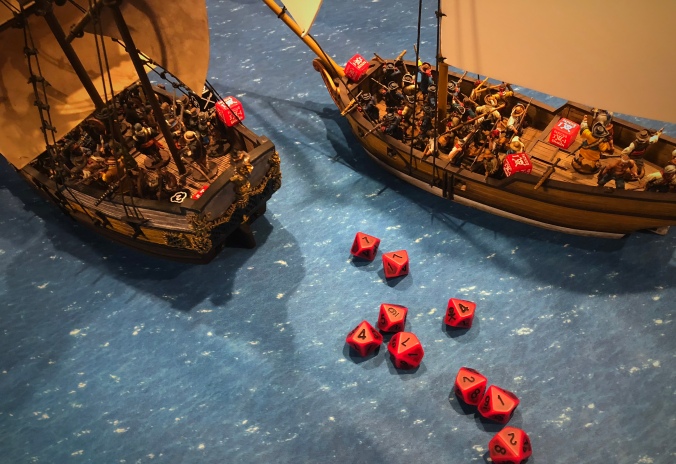 On Bryan’s final activation of turn 1 his Enter Ploeg stood and tossed firepots and grenados into my Privateer Sloop killing a couple more Piqueros and Soldados leaving them both shaken and prone. His Frigate pulled away from my Privateer Sloop and moved closer to my Gunship Sloop.

At the end of round 1 there were 8 Dutch casualties and 7 Spanish.

I was extremely fortunate to draw a 12 of Spades which barely trumped Bryan’s 11 on the first activation of round 2.

I was able to turn right in behind the Frigate with the Privateer Sloop and line myself for a raking shot at 5″ away!

I made a mistake here and rolled 3 dice per cannon instead of 2 after my ranting shot. I had just fired Grapeshot from the other side and they roll the full 3 dice so I carried that over. My (cheating) cannons got 14 hits and I thought this would secure the victory for me but the Dutch got some solid save rolls and only lost 7 men. The commander’s unit routed but Bryan spent a Fortune to transfer Admiral Crimson to the mid deck Zeelieden. We applied a lucky hit and 2 critical hits for 7 hits vs 3 fortitude but looking back I think we should have applied 4 critical hits since each hit counts as two when firing a raking shot. The game might have gone differently if we had done this all correctly, but the resulting destroyed gun, Leak and Fire was very satisfying. I think we forgot to apply Heavily Built to that shot as well… Its easy to forget things when you get excited! 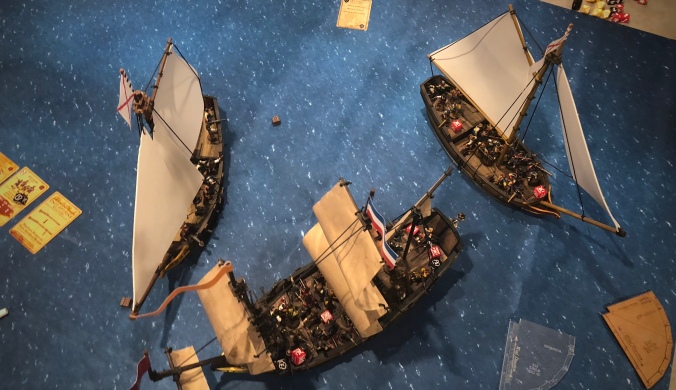 This brought the Frigate’s fortitude down to half its starting value which gave Bryan a strike point. 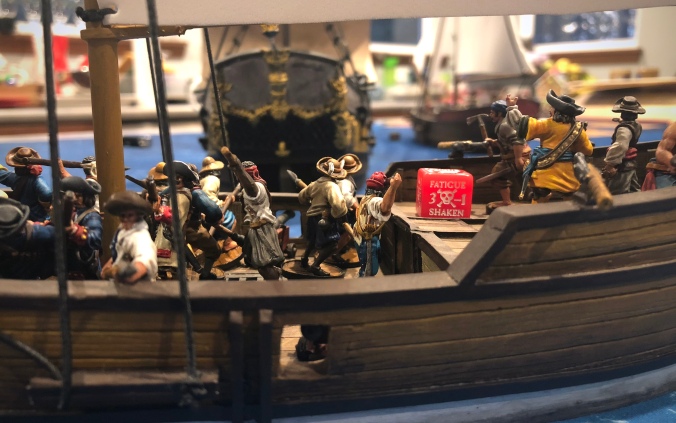 I’m not exactly sure what I did with my Flagship on the first activation but in retrospect, I should have moved it as far away as possible. The Dutch Frigate was able to move up just close enough to grapple my ship (on the second attempt) and proceeded to throw all manner of nasty explosives (2 firepots and 2 grenados) straight into my poor pistol-less Marineros followed by a charge by 12 Hard Charging Zeelieden and 8 Enter Ploeg on the next activation!

The poor neglected objective marker was unceremoniously crushed between the two ships.

My 12 Marineros melted away pretty fast but they got a couple hits before all being killed by the Enter Ploeg.

The Marineros couldn’t Save for anything but they passed every Fatigue test! 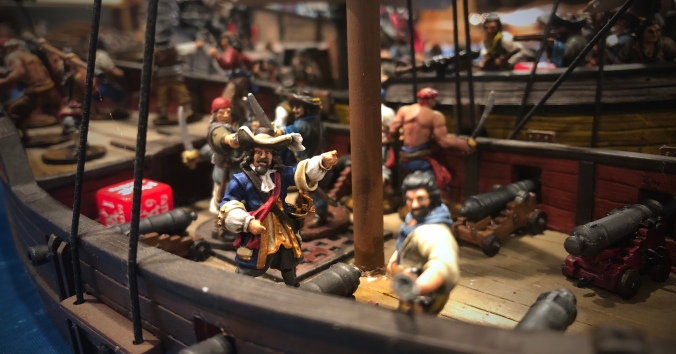 The Enter Ploeg about to kill the Feeble Zárate.

Commander Zarate, who was never supposed to get this close to combat, fell with his men.

The 5 Marineros in my rear deck made a plucky charge against the 20 Dutch who had just killed their commander and after miraculously surviving the Enter Ploeg’s defensive pistols, they drove both units back to their own ship.

With no enemies aboard their ship the proud Spaniards died gloriously amid a storm of musketry and swivel fire and the Dutch swarmed back into the empty Sloop.

My Privateer Sloop turned to join the fun but they missed their Grapple attempt and it was too little and too late. We calculated the Strike points at the end of round 2:

With 2 more Strikes than Bryan I’m forced to take a test but with Zárate’s body making its way to the bottom of the sea, he couldn’t roll the die and I automatically lost. 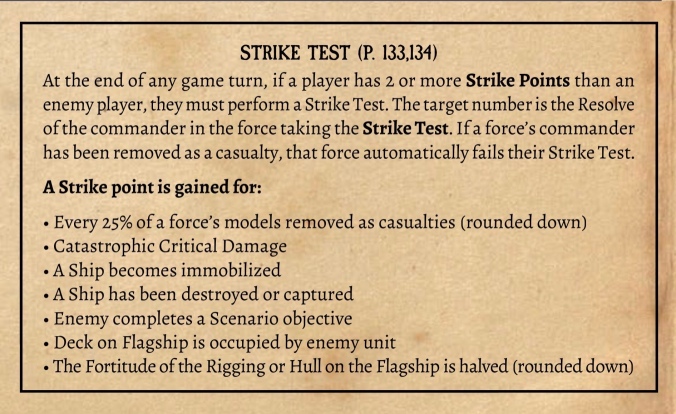 It would have been interesting if we had continued! My second Sloop was relatively fresh with 9 Piqueros Marineros and 9 Soldados ready to join the brawl. Bryan still had plenty of men but the two largest units were shaken and another was prone. Initiative would have been crucial going into round 3. If he had gone first he could have successfully rallied his Enter Ploeg and Zeelieden which would have made my charge attempts pretty difficult but if I had been able to go first, those Marineros Piqueros could have made a mess of those shaken units.

I wish I had been able to get these guys into melee combat!

Thanks to Bryan for a great game! The Armada will be back looking for revenge at some point!