In Blood & Plunder each nationality has certain distinctives that make it interesting and unique. I’ve been writing a series of articles that look at distinctives of individual factions (there are several factions within each nationality i.e Spanish Militia are very different than Spanish Corsairs) and those articles get into the nitty-gritty details of units, abilities, and strategies. This is part of a new series of (hopefully) shorter articles aimed a newer players or people interested in getting into the game. In each article I will take a bird’s eye view of a nationality as a whole and the various factions within it. When you buy into the game, one of the first things you will need to decide is which nationality (or nationalities) do you want to play. Hopefully these articles will give you an idea of what makes each nation special, what options you have within that nationality and which factions would be the most fun for you to play.

This article is a little different than most in this series since the factions that fall under the Unaligned and Minor Powers category don’t always have a lot in common. I’ve already covered the pirate style Unaligned factions previously so this article will look only at the various factions representing the minor European powers that are represented in Blood & Plunder.

A couple unique things about these factions before we briefly look at each one. First, there are not unique sets of models for each of these factions like there are for English, Spanish, French etc. In general these factions use some of the Firelock generic European army models but give them some unique game flavor with faction-specific rules, or they use models from a similar nation. You won’t find Scottish models in Firelock’s products but a lot of generic European models along with some English models. It’s unfortunately cost prohibitive to make unique sculpts for every minor power so your force won’t be as unique and distinctive as the major powers, but you can give your army character with your paints schemes and it’s possible to find some fun miniature that work from other game lines as well.

Secondly, these factions aren’t as deep and rich as the larger factions. No surprise here. They’re minor powers! Most of these factions have one unique historical commander while the larger nations might have 8-15. You wind find the massive unit variety and multiple ways to structure your force like you might with the Spanish Militia. All that to say if you choose one of these minor powers as your main or only faction, you might miss out on some of the options and diversity that keeps the game interesting and exciting if you plan to play the game a lot. But on the other hand…

Each of these factions is actually pretty closely related (in game terms) to a major nationality so you can move from a minor power to a larger faction fairly easily and vice versa.

This faction doesn’t have a lot of unit options but it has one very good option that makes the faction unique. As a core unit, the Bandeirantes can arm the Spanish Milicianos Indios with muskets at no extra cost. Then means you get a low cost, accurate musket unit with many of the Native special abilities without the Slow Reload penalty you see on the native Warrior Musketeers. They still aren’t very stout in melee, but they have Quick, Elusive, Skirmishers, and Scouts all for 5 points and you can even upgrade them to Veterans at 6 points each. A full force of these fast and slippery Indios with muskets is a very dangerous force.

They also have access to the basic European Militia but the Indios are certainly better value for the points unless you just want to get a lot of bodies on the board.

This faction is much stronger on land but it can punt around at sea, utilizing their sailor support units. Without core access to an artillery crew, they can’t really arm a ship with cannons efficiently.

Their one unique leader, Francisco Dias Velho, like nearly all of the minor powers’ unique commanders, is expensive and powerful and most suited to games of at least 200 points. He really boosts his unit’s melee ability.

To play this faction, you will need to pick up Militia models (Spanish, English or Dutch), a lot of Milicianos Indios and possibly some sailors of some variety if you plan to go to sea. The Spanish starter box would be the most useful of the boxes but if you really want to focus on this faction, I recommend just buying the sets of minis you need rather than buy a starter box.

This is a very flexible, powerful and fun faction to play. They play much like the Spanish, but they have access to some excellent units that are improvements (in many cases) to the Spanish equivalent. They have the cheapest cavalry in the game, they have access to the Milicianos Indios with muskets (just like the Bandeirantes), their expertly drilled European Soldier unit is extremely good, all their units gained the Drilled rule and there are 3 variations on the faction you can play so its easy to keep things interesting. 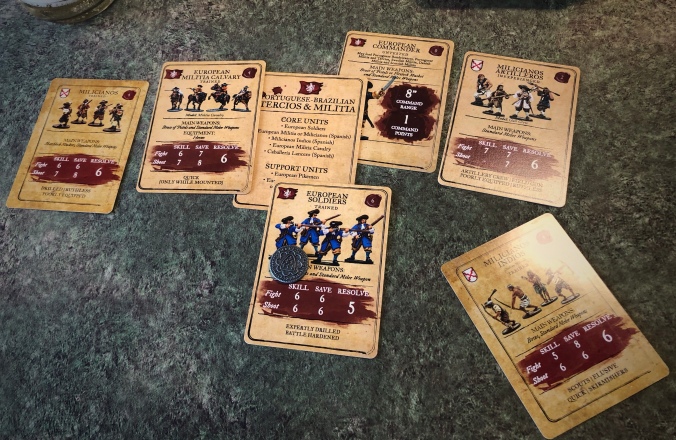 You can play as a well rounded army with cavalry, artillery, skirmishers and infantry, or you can play as a guerrilla force, or as a strong naval faction, or as a unique Jewish force that gives you access to the tough Jewish Militia unit.

I think this is the most interesting of the minor European factions just because of its size and flexibility. Francisco Barreto de Meneses, their unique leader, has an ability that bolsters their melee ability. 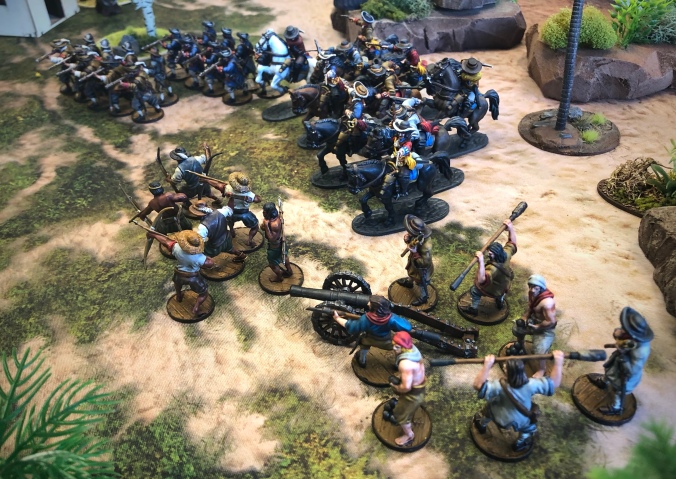 The European Militia starter box is a perfect first purchase for this faction and you can suppliment with more European Soldiers, sailors or Spanish units depending on which way you want to go with the faction.

The Danes have fairly limited force options but their units are good and their faction-wife ability to shed Fatigue is very good. They have good access to sailors, generic militia and decent access to the strong European professional soldier unit. You don’t have a ton of options for the Danish Militia and you don’t have access to any of the unique or unusual units, but what you get is solid.

The Danes are a solid choice when battling the Natives as they can keep Fatigue off pretty well with the Tough rule on all their units. Adolph Esmit, the Danes one unique commander is a 30 point, heavy future commander that’s well suited to leading his men right into the center of the battle.

The European Colonial Militia box would be a good first purchase for this faction along with some other militia models and some European sailors if you wanted to go to sea with them.

This is a strange faction. They have several bonus rules for engaging in melee combat and their unique commander pushing that theme even further, forcing his men to charge when able!

The Swedes have the “best” pikemen in the game with the ability to upgrade them to Veteran if desired along with the two bonus factor rules that boosts their effectiveness in combat. The pikemen still aren’t a very good unit but if you want to use blocks of pikemen, this would be your faction!

Their support unit selection is much more diverse than some of these minor powers with a couple Native units making the list.

There’s no one starter box that really provides all the units you might need for this faction. I would recommend just buying packs of Spanish militia for your militia unit, Pikemen, some European Soldiers and a few natives if you want some variety.

The Scottish Militia is another well rounded faction. It doesn’t have as much flexibility as the Portuguese, but they do have access to all the main basic styles of units: militia, regulars, artillery, sailors and cavalry.

Their faction rules give them some extra speed and melee bonuses but overall, they’re and stout land based militia faction. Lots of guys with muskets supported by either some artillery or cavalry. You can rake them to see but you won’t be able to really fit out a larger ship with cannons.

You have access to two of the best English units and from one perspective, this faction can basically be an English militia faction with more useful faction rules.

The unique commander available to this faction let’s you bring along two different native units as core units which gives you a lot more possible variation in list building.

The European Colonial Militia box is a good place to start for this faction and it would probably also be smart to pick up some packs of English militia. It would be easy to move to or from the Scottish Militia the English militia factions.

This small faction is essentially a Dutch faction without the Dutch commanders. It’s a solidly naval faction that excels at working cannons on ships. They don’t have a lot of unit options but they have good options for what you need at sea. 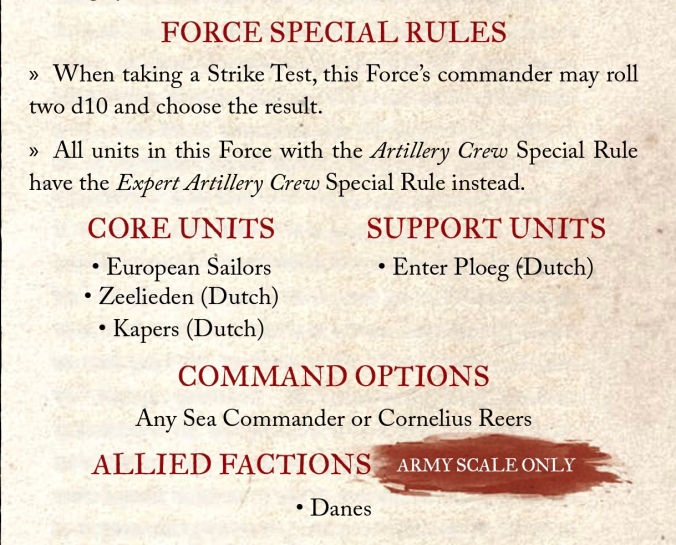 Their faction abilities improve their already solid cannon stats and also makes them extremely tough to beat without totally destroying them. A very stubborn faction!

Their historical commander further improves their prowess on their guns and he’s capable of commanding a large ship or even a small fleet.

Overall I prefer the Dutch Royal Navy or Dutch Privateers as they have the same strengths with some more options but this is still a decent minor faction. It’s really easy to build a Brandenburg Privateers force once you have a Dutch force put together.

If you want to start with this faction, the Dutch starter box is a fine purchase along with a generic European Commander model and maybe some European Sailors (with or without muskets). 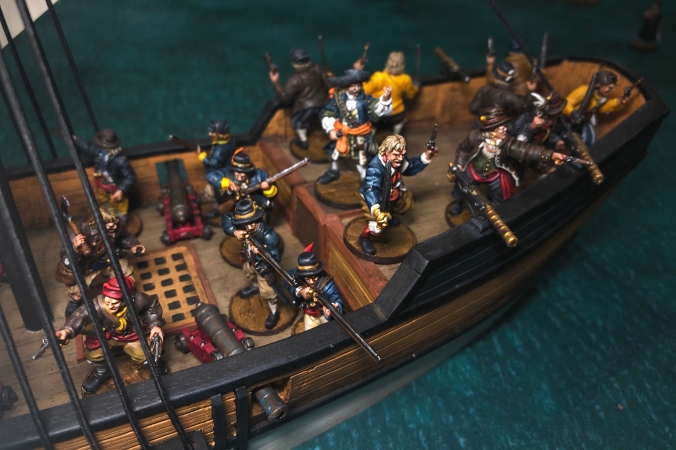 That covers all the factions I wanted to look at here! I’ve covered the Black Caribs in the Native Factions article and the Brethren of the Coast, Logwood Cutters and Pirates in the Unaligned Factions article. This post focused only on the minor European Powers section of what the No Peace Beyond the Line book classifies as the Unaligned and Peripheral Powers.

Looking at this set of factions, I would consider the Portuguese-Brazillian Tercios and Militia and Scottish Militia as the most well rounded and fleshed out factions that would provide the most long-term interest. The Portuguese Bandeirantes are probably the most unique of the lot while the Danes and Swedes are slightly less interesting to me.

I appreciate the time and effort Firelock put into creating these minor factions and the distinct flavor they were able to give each one. If one of these factions looks like something you’d like to explore, just remember there aren’t unique models available for each of these factions. Most of them use either some of the generic European militia/sailors/soldiers models, or some other larger faction’s models. You can provide character to your force through you painting efforts or you can even find some more colorful models outside of the Firelock line of minis if you like.

One thought on “The Peripheral Powers Factions”