Ahoy there mateys! Cap’n Dan is back for another article! Here, I will be going over the newest ship in the Firelock Lineup (as of March 2020): The 6th Rate Frigate! As Blood and Plunder’s very first Rated Ship, its quite a doozy!

The 6th Rate is essentially an upgraded Light Frigate.

It has the same sailing profile, it’s just larger. It has the 5”, 4”, 3”, 2”, 0, and Anchor sail settings, as well as the 3” Turn and -2” Windward Penalty. This means it can both run and pursue with relative ease. Staysails keep it from stalling even against the wind. The only change is that the 6th rate has a Draft Value of 9, as opposed to the Light Frigate’s Draft Value of 8. 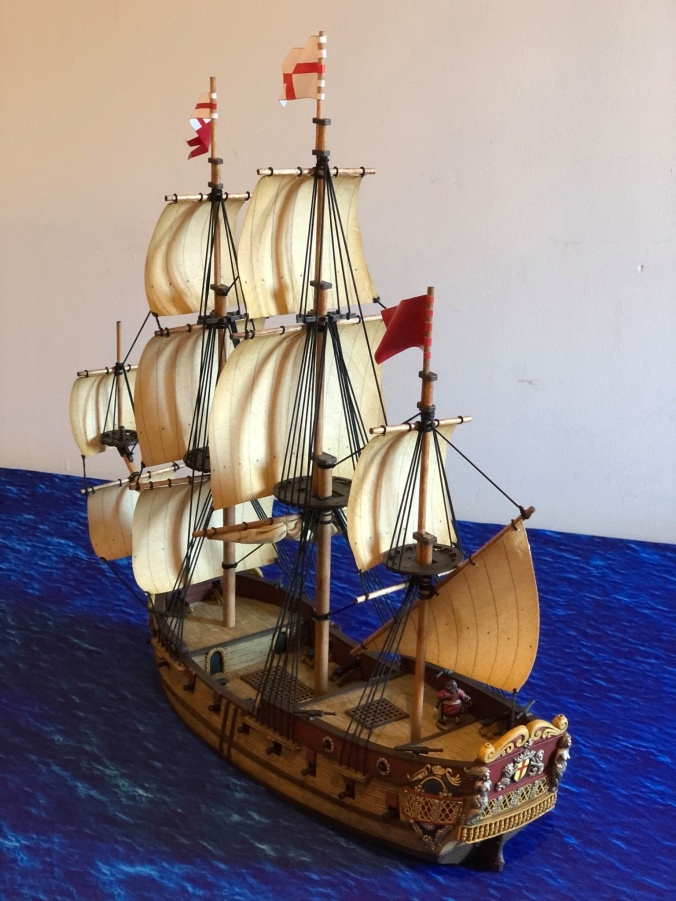 This ship excels in the firepower category! She can hold a total of 26 Cannons when fully equipped with Bow and Stern Chasers, or 8 swivel guns if you forego the bow chasers. While not as much as the Galleon, this is amazing for the speed factor. The only downside is the Limited Capacity special rule, which makes it so you can only take 1 deck of heavy guns, and also reduces your speed to 4 inches. I would not recommend using this at all since the 6th Rates’ greatest feature is that beautiful 5 inch speed.

Like the Light Frigate, this vessel starts out at Fortitude 5, making it awesome for going broadside to broadside with ships in or below its class. Ironically, it retains the same 24 Bubbles that the Light Frigate has, meaning you haven’t lost or gained any durability for the points cost. However, the rigging Fortitude starts out at 4, and has a total of 18, which is a vast improvement over the Light Frigate’s 12. Honestly, I’ve never shot at rigging before. I prefer to kill models instead of rope so this upgrade is kind of expected, but won’t affect gameplay much….unless Firelock decides to add chain shot in at some point.

The 6th Rate has quite a few Special Rules. It has Fighting Tops 3, so on each mast you can put up to 4 models on the platforms that come with the kit. It can take Bow and Stern Chasers, but if you take Bow Chasers you must lose 2 Swivel Guns, so these are situational at best. Whipstaff means the ship can turn without penalty even if there are no models on the rear-most deck. This is a much underrated rule, as it gives your men room to maneuver around and below decks. The last two Special Rules are meant to make the 6th Rate historically accurate. Deck Guns states that any guns placed in the rounded gun ports or as bow chasers must be light guns. This means if you fully equip the ship, 6 of those cannons can only be light guns. Limited Capacity, as discussed in the Firepower Section, limits the amount of heavy guns you can take on this speedy beast by limiting them to 1 deck, and knocks your speed down to 4”. While most view this as a potential threat, if you’re fighting a fully equipped Galleon, chances are you’ll be running mostly Mediums and have ample boarding crew to take that pesky vessel anyway. The Galleon is a floating fortress, the 6th rate is meant for speed and maneuverability. The Upgrades are a hit and a miss, however. +2 Points for Sweeps 2 is cool, but you REALLY should be staying in the wind since you lack Staysails. The Wheel Upgrade for +2 is invaluable if you have a unit with Expert Sailors manning you sails! This means that you pass ANY Advanced Maneuver on a 3+…that’s an 80% guarantee you’ll pass! If you are forced to Tack, this will come in mighty handy!

The 6th Rate has four decks, as it’s a size 4 ship. I’ll be referring to the decks as Deck 1-4 respectfully, starting from the front deck.

Of all the factions I’ve played, one stands out superbly: The Dutch Navy. Choosing the “Ships of the Hoorne” faction rule gives any ship the “Heavily Built” upgrade for free! This increases your durability by ignoring the first point of damage to your hull from every artillery attack! In fact, if you wanted to be “That Guy/Gal”, you could play this faction, load up on Enter Ploeg, and then zoom in, board, and slaughter you enemies’ crew….if you like having friends, however, I do NOT recommend this course of action!

Being a size 4 ship, you probably need to be playing at 250 points or more to make this ship work at it’s optimal level. If you’re playing 200 or less, the Light Frigate is likely a better choice.

Photos in this article are used by permission of Dan Carlson, Liam Taylor and The Just Dice League.