My current local campaign has progressed to round 5. This is a non-standard campaign with Guy Rhueark, our “Campaign Master,” playing NPC Spanish that players encounter if they fail to bump into another player’s ship in our campaign map of the Caribbean.

This round, my Pirate Hunters commanded by Thomas Clarke had the task of raiding a small Spanish port.

Last campaign game I doubled down on cannons to fight the Spanish Corvette but for this amphibious game I cut back the cannons and boosted my Militia and small arms fire, anticipating getting off my ship and attempting to seize an objective on land. 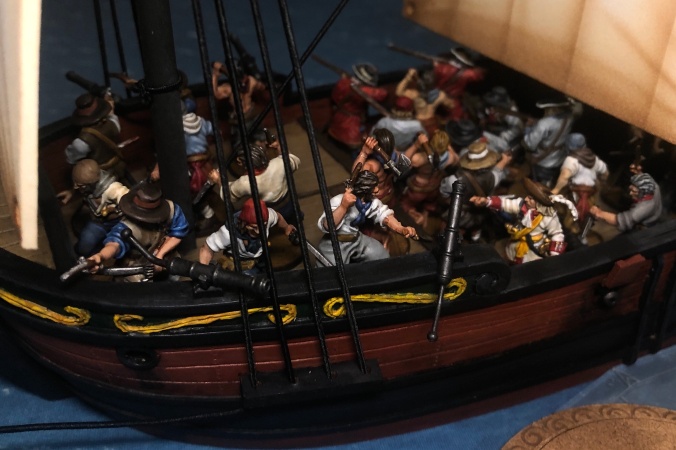 My campaign commander is up to 20 XP and looks like this: 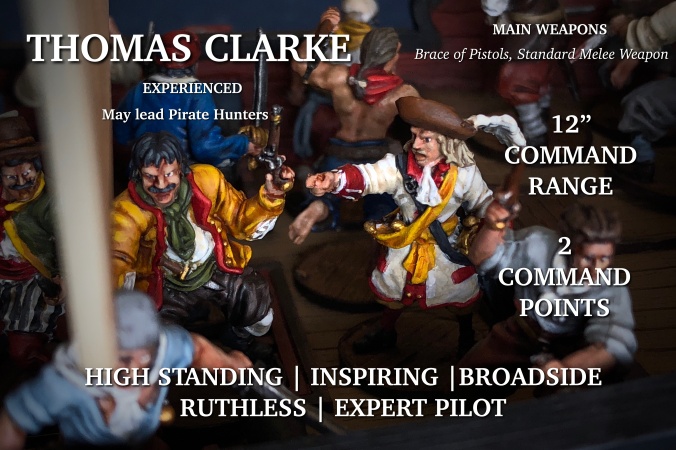 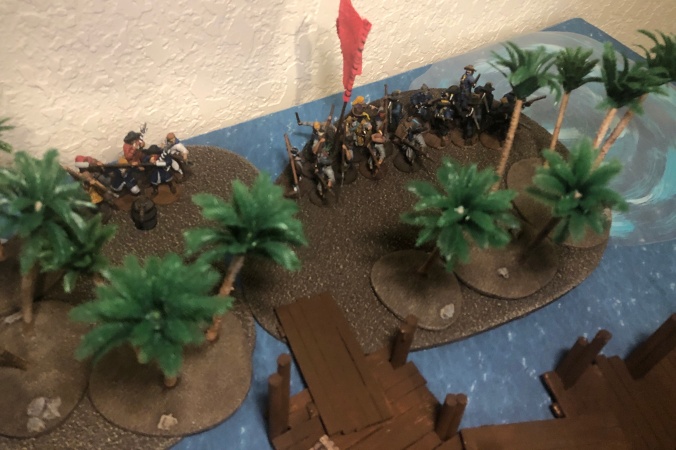 The Spanish commander was custom built using the campaign rules starting with 20XP. I don’t remember the details of all his abilities but I remember the command range had been maxed out at 16″.

We’ve been using Encounter at Sea for this entire campaign at the 200 point level but we decided to break it up a little with a different scenario. Guy recently finished a large set of docks he was working on so we decided to do an amphibious game utilizing all the docks with various boats and ships available as terrain and using the Take and Hold scenario rules.

This scenario places an objective in the center of the board with both the Attacker and Defender deploying 20″ away. If the objective is controlled by a player and there are no enemy units within 4″, the opposing player gains a Strike Point.

We placed the objective pile of gold on the dock in the center of the board and then placed our units 20″ away. The scenario specifies that we determine the wind direction randomly before units are placed. At the beginning of the game the wind was coming from the viewer’s direction in the picture above. 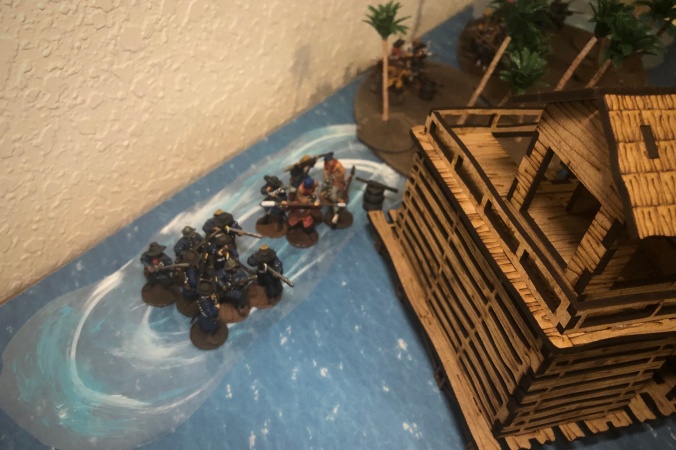 I forgot to bring my coastal land mat so we used these shoal terrain pieces for “land.”

Guy deployed his Spanish along the back edge of the board and placed one unit of Hostigadores prone in the Bark using the Spanish Militia Lay in Wait rule.

I drew an event in my opening hand which triggered a wind and weather change. The weather remained the same but the wind moved one board edge clockwise which put me in the wind’s eye and forcing me to work my way up wind for the rest of the game! Not a nice start for me.

I had set my starting sail setting at 4″ at the beginning of the game but not that I had to take a 2″ windward penalty, that didn’t seem like such a good idea!

These flags are pointed backwards. The wind was coming from the opposite direction.

I worked my way upwind over the course of the first turn, alternating turning 2″ into the Wind’s Eye and Wearing away from the wind.

The Spanish worked their way forward with a couple units taking up positions in the building. The Hostigadores were able to get a shot off and killed a Sea Dog but I was able to return fire with my swivel guns and do a little damage to them as well.

I approached the dock on turn 2 but since I wasn’t really ready to grapple to a deck which was about to be swarming with Spanish soldiers, I managed to nearly stay in the same position for most of turn 2 as I turned 1″ to the Left and 1″ forward on the first movement, then drifted 1″ back out of the wind’s eye on the next movement, then moved and turned again on the third movement. I managed to move forward a couple inches while not needing to use a unit’s action to sail the ship. (I hope I’m doing this correctly…)

Nothing beats that set of 4 Swivel guns activating on a Heart with Expert Artillery crew. Fire off 12 dice and accomplish a full reload in once activation. I poured a good number of dice into that unit of Hostigadores that were placed in the Bark, but they were pretty resilient. I killed a couple but they Saved well over the course of this second turn.

One unit of Hostigadores pushes forward and too cover behind some barrels and crates. They fired into the Sea Dogs on the swivels guns but apparently the dockside air and dampened their powder and they scored no hits.

One of the units of Milicianos Artilleros moved forward with its swivel gun and set up position in a Bark where it could fire on my ship.

By the end of turn 2 we had both taken a few casualties but neither side had enough to count as a Strike. 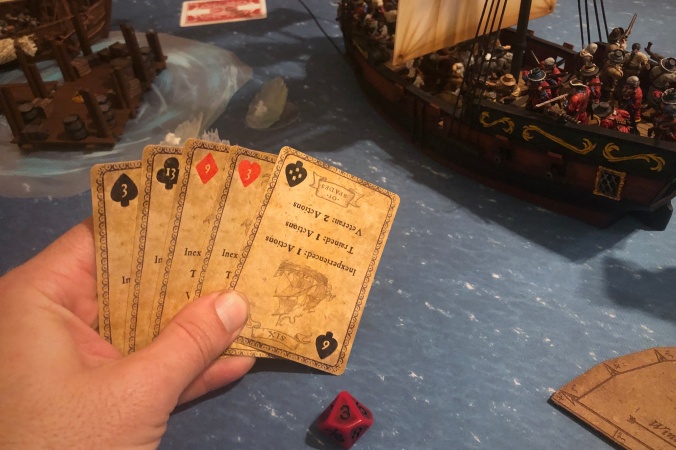 I opened turn 3 with my first volley from my cannons. I fired 6 dice of grapeshot at the Milicianos Artilleros in the Bark. I got three hits but they saved all but one! I was really looking to take out a unit but my attempts were foiled by good Saves!

I kept up small arms fire while the Spanish continued to move forward.

The Spanish commander spent a few command actions rallying his men so they could effectively return fire. 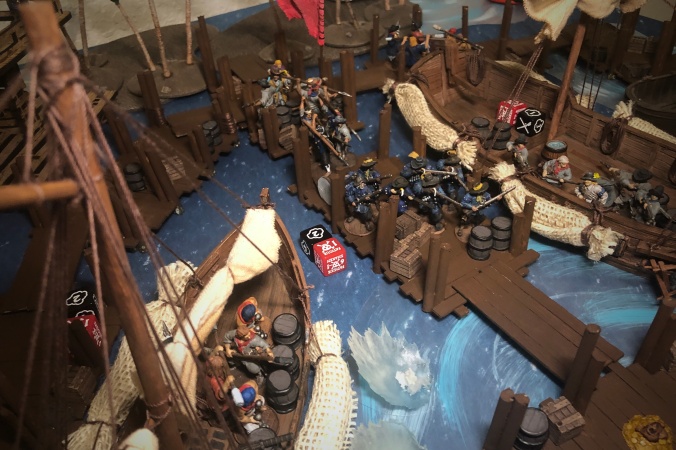 The Lanceros moved up looking for an opportunity to get into melee combat but I kept my ship in a controlled flounder off the docks.

Turn 3 was rather uneventful overall. Mostly trading fire and the last of the Spanish troops moving up. Overall my English were getting a few more hits through and the Spanish casualties and fatigue started to build up.

By the end of turn 3 Guy’s Spanish had 1 Strike point for casualties but neither side had control of the objective.

I drew a nice spread of activation cards on nearly every turn over the course of this game.

Turn 4 is where things started to turn in my favor.

Just barely out of the wind’s eye, I was able to turn into the wind and get up close to the dock, ready to grapple and jump out and seize the prize if I had the opportunity.

Activating on a Heart, I fired my 12 forward swivel dice into the Hostigadores that had been in that Bark for the entire game. I killed a couple, but feeling I was gaining the upper hand, I wanted to push my men a little more! Using their Expert Artillery Crew, they got a free reload, they used their second action to fully reload their Swivels, then I pushed them for a third action to fire their guns again! Pushing for an extra action and firing twice gave them two points of Fatigue but firing off 24 dice hitting on 7’s was enough and it eliminated that unit of Hostigadores.

I lost a few of my Sea Dogs on my cannons to Spanish Swivel fire but not enough to reduce efficiency.

I finally decided to stop floundering in front of the dock and a successfully grappled the mid-deck to the dock, pulling my ship up to the dock. My commander ordered the swivels in the back to fire on the Spanish swivel gun and left them prone. My Inspiring commander cleared both Fatigue off the overworked Swivel crew.

The Hostigadores who had been sniping from the top level of the larger building came down and jumped in the canoa and put out to sea.

More fire from my ship left the other large unit of Hostigadores prone on the dock. Now I was within 4″ of the objective and had control of the prize!

With two more Strike Points than the English, the Spanish Commander rolled for a Strike Test and failed. With no Fortune Points left, the game came to an abrupt end here at the end of turn 4. 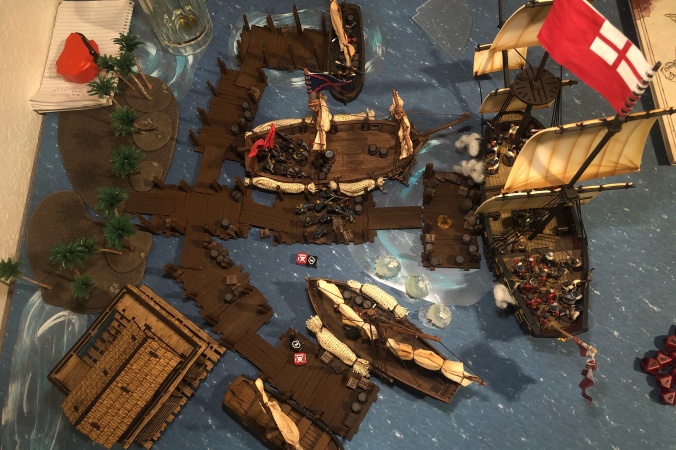 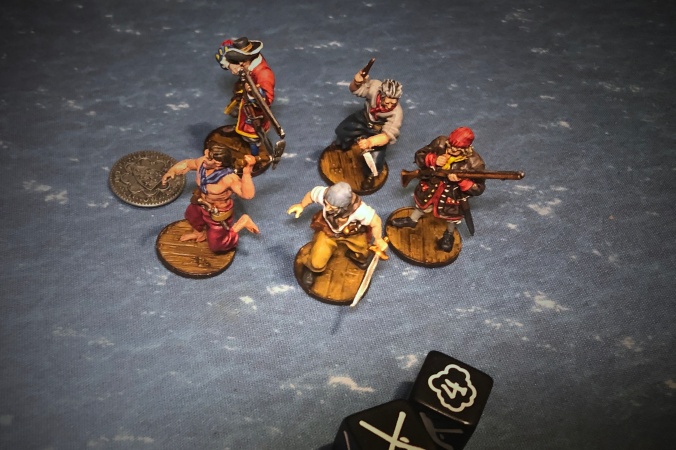 Thanks to Guy for a good game and for running this campaign. I’m looking forward to finding that stricken Spanish Galleon and attempting to take it as a prize!

Thanks for reading. I’d like to hear your opinion on which skill I should take next for my commander (keeping in mind that most of these campaign games are 200 point Encounters at sea and I’m limited to using this Sloop of War through the rest of the campaign).